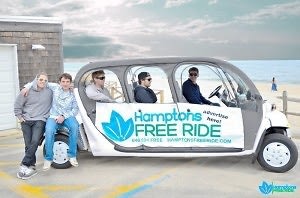 According to 27East, the taxi drivers in East Hampton feel that the town is favoring Hamptons Free Ride over them and they are not happy about it, so they are banding together, throwing a tantrum at the expense HFR. [Photo via]

Dan Broe, a driver for Bill’s Taxi, claimed that the shuttles are nothing more than golf carts (which is fairly true, I must say) and that the frames are flimsy. Then Chip Dayton, of Dayton Taxi, mentioned that HFR has pick up and drop off signs and taxis don't, an example of how they don't get the recognition they feel they deserved. Dayton added, "They’re getting that, why can’t there be a little more recognition of the taxi business in the village? They don’t do anything for taxi companies. They’ve never made any accommodations.”

Hoooooold on a second, the taxi companies need more recognition from the town? I think allowing you to charge an arm and a leg and not doing anything about it is pretty nice, if you ask me. Recognition is probably the last thing you want, to be honest. But to put into perspective why HFR is the golden child and the cabbies are the red headed step-children, I have made a slide show pointing out the reasons.