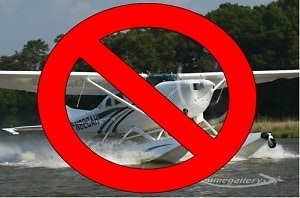 If you're jetting out to the Hamptons this weekend, you may need to refile your flight plan. A no-fly zone will go into effect over Southampton tomorrow due to "VIP movement," according to the Federal Aviation Administration. The restrictions will remain in effect until Wednesday, Aug. 4.  So...who could it be?

No word yet on who the restrictions are for, but we're betting it's a high-ranking politico. The last no-fly zone over Southampton was in June, when Vice President Biden visited an estate in the area. A similar zone has been instituted for the suspected location of Chelsea Clinton's wedding in Rhinebeck, NY.

Pilots can still fly through if they file an instrument flight plan and receive clearance from the tower, but planes that accidentally cross the airspace could face very unfriendly F-16 fighter jets.