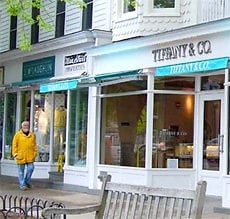 The Hamptons may be wealthy, but they sure aren't recession-proof. A recent article in NY Magazine dug a little deeper into the ways the Hamptonites have been pinching their pennies...like lowering the price of lobster salad...

Though better than last year, the recession is still taking its toll on the Hamptons.  Steven Gaines at the Daily Intel points out that while we can still count on a few Hamptons guarantees - traffic, golden hordes, and that signature sense of entitlement hovering over everyone's head - things have definitely changed. For example, The Capri (and Pink Elephant, for that matter) are no longer the Southampton staples they once were. The Parrish Art Museum had to scale down its new building venture. Even the Town of East Hampton is having issues with its credit rating, with Moody's revising its outlook from stable to negative. Uh-oh.

But the effects of the recession aren't all bad...now we can get our lobster salad for a mere $40 per pound instead of that $100 price tag we were forced to deal with back when the economy was booming. Hey, we'll take any consolation we can get.

For the full article from NY Mag, go here.