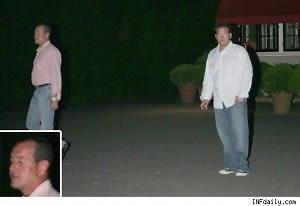 [Michael Lohan and Jon Gosselin (i.e. GOHAN) leaving Red Bar in Southampton. Picture via TMZ] So we realized that there would be a good number of people interested in the fact that Michael Lohan and Jon Gosselin are trying to become the next big thing in celebrity bromances, but we didn't quite realize the wildfire our post would spurn (or @rjhilbertiv's tweet) when we put it up yesterday afternoon. And, oh the doubt! Is it really that hard to believe that these two would buddy up? Apparently some of you think so, despite the numerous people who saw Gohan frolicking all over Southampton together. But just to erase all doubts from any of your minds, we put in a call to The Driver's Seat to confirm what we already knew: Jon Gosselin has more than 8 - he had a date. A double one, with Michael Lohan and two blonds. 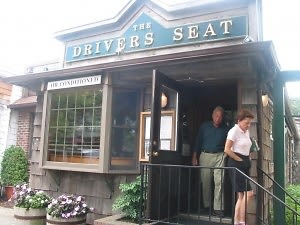 The Driver's Seat, on 62 Jobs Lane, is apparently a favorite of Michael Lohan's, who's friends with the owner. A good spot then for a first date - and we are referring to him and Jon, not to the girl he was with, obviously. The dynamic duo ate lunch outside yesterday with their lovely ladies. We were happy to hear that not only were they very polite - in fact we were told they were possibly the most courteous diners of the whole day, girls included- but Jon said "please" and "thank you" after everything. We hope he passes those same manners on to his kids... all eight of them. As for Jon's date (the other Kate, we're presuming)?

Apparently she was dressed in head to toe black, "approximately" 5'8", and sporting Chanel sunglasses. We were hoping for some juicy details about how the whole table was all over each other and Jon and Michael swapped girlfriends over appetizers, but unfortunately for us, there wasn't even any hand holding going on. Luckily for them the paparazzi weren't around, but they couldn't escape their "fans": People did approach Gohan to speak with them. Afterall, it's Michael Lohan and Jon Gosselin! How could you not?! As you would expect from all high profile tabloid stars, the group was traveling around in a hard top Mercedes. However, the squad was rolling deep with two cars - the girls drove off in the Mercedes sans boys after they were done hanging in Southampton. Off to Cooper's Neck Beach perhaps? Apparently there was another Gohan spotting there as well... and all over our pristine Hamptons. We're really hoping we see them hit up the Flabong-o at Day & Night this weekend. Do you think Kate Major would be down?