Sometimes the glam and the glitz of a long weekend can get to be a little much. Don't get us wrong, we love a nice cool glass of rose at Day & Night, or checking out what label Nikki Hilton has on at Lily Pond as much as the next weekender. But if you're looking for somewhere to take a load off after all the preening, plop your pretty butt in plastic chairs, and take a break from it all, we might have just the place for you. We can't say John Scott's Surf Shack is off the beaten path, because it certainly is not.

Right on Dune Road, I still don't know how I knew about this place before Rachelle (know-it-all...literally) and Kristin (who's summered in Quogue her whole life), but it's no kept secret. Filled with families, surf boys, and pre-gamers, the restaurant and bar serves above average bar food with a rowdier than average bar crowd. Live music on weekends on their deck is almost as good as their view; John Scott's outside seating overlooks the bay. Heavy-pouring bartenders that are quick to pull out the shot-ski will definitely add to the night, as will the eclectic crowd. As mentioned before, many use John Scott's as a starting ground before moving to their next location, varying from the Drift Inn to Pink Elephant. We will say though, they may have some of the most discriminating doormen in all of the East End - when it comes to checking IDs that is. Considering he thought mine was fake (it took two credit cards and a health insurance card for him to finally let me in). Personally though, any place that has lobster bibs and plastic buckets is good with me. I'm not quite sure how often you see those in Easthampton. 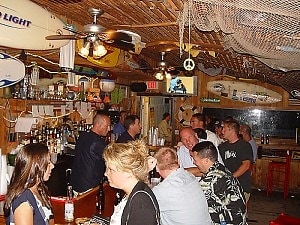 It's just like that bar in Cheers where everybody knows your name. Except here they were likely to forget it five minutes later." - Carrie Bradshaw, Sex & The City