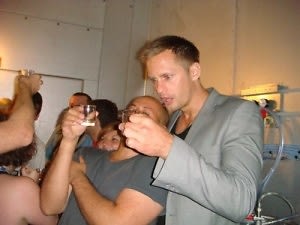 [Photo via] If you weren't out celebrating in the Hamptons for the last weekend of the summer than, admit it, you were stalking Alexander Skarsgard. True Blood's hottest male vampire was hitting up some of the hottest nightlife venues out on the East End this past weekend and it's your loss if you missed it.

On Saturday the blood thirsty vamp was apparently also tequila thirsty when he showed up at Paul Sevigny's Statium Red Estate in Water Mill, ordering "shots of Patron," according to the Post. Skarsgard then continued the party with some clubbing at South Pointe.

And he kept going on Sunday -- as he rallied for round two at Montauk's Surf Lodge, party animals got to flirt and take pictures with the beaming beauty despite his completely clothed appearance. While he might not have been causing the same problems we see Eric Northman doing on True Blood, he sure was keeping girls on the prowl.