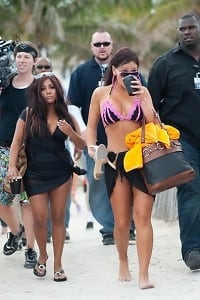 Some worry that season two of Jersey Shore won't live up to the first. The kids are students of the show now. Overexposed. Practiced. Cunning. But you can always Greyhound it to Seaside, bask in the memory of simpler times and buy a T-shirt commemorating a girl getting socked in the face.

Every TV show that surpasses standard Nielsen ratings success and crosses over into Zeitgeist-ville these days seems to inspire a cheesy tour of its setting. The real life inspiration for Kramer organized a Seinfeld-themed bus ride around the quirky city. And as anyone who pointedly avoids the West Village on nice weekends knows, a Sex And The City caravan regularly descends on Magnolia Bakery and Carrie's townhouse.

Maybe it's because TV-on-DVD and the internet have deemed syndication irrelevant or maybe because the almighty dollar is mightier than ever, but giving fans (what they think is) a brief tactile relationship with their favorite boob tube mind-number is par for the course these days.

And although the phenomenon hasn't been completely co-opted when it comes to Jersey Shore, huge crowds are shuffling around Seaside Heights hoping to emulate the likes of Snooki and The Situation and reaching out and touching the Jersey Shore experience themselves (hopefully with latex gloves).

"On weekends, as many as 400 people a day have been known to pose for pictures [at the Jersey Shore house]."

Granted, Seaside has been a summer destination for decades, so this "tour" is more convenient than Seinfeld's and Sex and the City's. But whereas the ripoff recreations of those series targeted niche demographics (quirky urbanites/Jews, moms of a certain age living in a newly empty nest), Jersey Shore and the Jersey Shore attract the motliest of crews.

Rich People: In a New York magazine cover story on what critics just can't stop calling the Golden Age of Television, Michael Hirschorn jumped to Jersey Shore's defense, saying that the people who protested the series were whack and that it "should have been lauded as shining a light on a constituency largely ignored in popular culture: lower-middle-class Caucasians."

Maybe so, but the show's surprise success might do the unthinkable and gentrify Sleazeside, keeping out people of modest bank accounts who sought refuge there and made it what it was. The Jersey Shore house will rent for $6,000 a night this summer.

"Seaside Heights Police Chief Tom Boyd said there will be 20 police officers each weekend on and near the set, with an additional 20 MTV security personnel -- a tenfold increase from last year."

Women in the midst of a midlife crisis: Dawn Sitler is a 42-year old former Jersey Girl now stuck in Texas who drove from Fort Hood to Seaside Heights to pose in front of that Italian flag/garage door. She says:

''It's where we want to come back to and party. I partied hard when I was younger. Watching them reminds me of the younger days 20 years ago. This is a good place to come to have fun.''

You can take the girl out of Jersey...

Chris Brown types: Do you know the bar where Snooki was famously punched in the face sells a black T-shirt with a chalk outline of a female body and the words "Snooki Was Here!"? It's true. And if that's not disturbing enough, there's also this story:

''One day... a girl is lying on the floor of the bar and another girl is taking pictures of her.'' said the bar owner, Michael Carbone. ''[Someone]said, `What are they doing?' I said, `They're imitating Snooki.'''

With tales like these, maybe the bar for season two is pretty low after all. Sometimes, TV can't disappoint you anymore than the humanity that eats it up and mimics it.