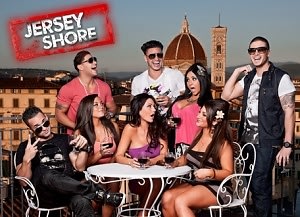 Jersey Shore season 4 premiered last Thursday and was well worth the short wait. Our favorite tanned Guido stars are back in MTV rotation and we could not be happier. Here's a recap of the premiere episode if you didn't catch the repeated rotation of it over the weekend. Plus, a look at their Florence house.

So Many Questions So Little Time

When taking passport photos, I was not aware that you could wear sunglasses and do your best nightclub picture poses.

What was up with that awkward sleep-over at Vinny's house the day before they left the States?

There's nothing like good ole' Uncle Nino and Vincenzo's other less-famous uncles translating seductive words for the boys to use in to attract Italian girls. Is Vinny the only one bent on learning Italian while in his motherland? 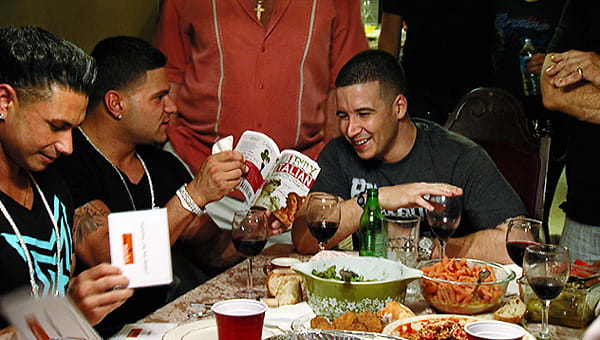 Did you see the look of devastation on Pauly D's face when he thought his blow-dryer blew its fuse?

Speaking of hair, is Sammi sporting even longer human-hair extensions this season?

If The Situation did smush Snooki, why tell Ronnie? The information was said in the sneakiest of ways.

When will we learn how to say "T-shirt time!" in Italian?

We really should keep count as to how many times either Snooki or Deena fall and connect with the ground. 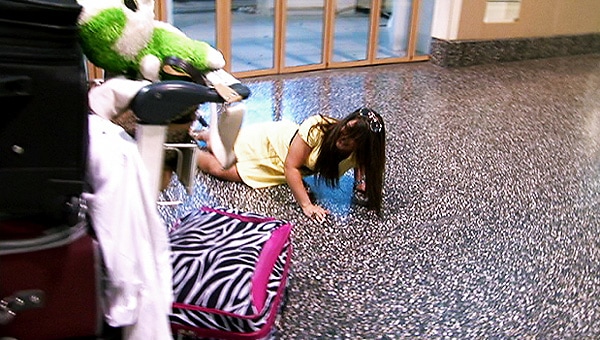 The Woww in Jenni's nickname is really not being put to use. Doesn't she seem kind of a bore so far? Maybe its me.

How long will it be until they break that hot tub in?

When will Mike realize that his douche ways have exceeded the amount of douchery allowed on television? Will he bring his funny 1-liners back? 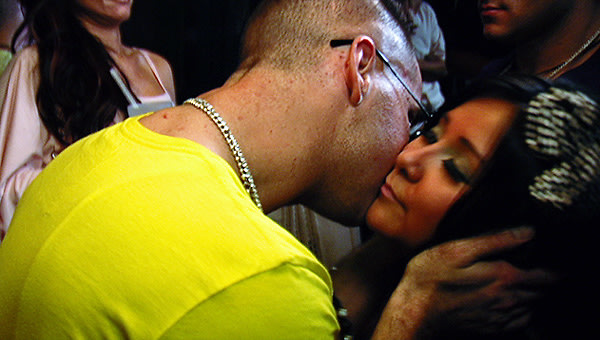 What To Look Forward To

After checking out previewed clips of scandalous happenings from the rest of the season, it appears that a couple of smashing things are soon to occur. And everyone's gunning for Mike's tanned head.

If what Situation said was true, and he did indeed hook-up with Snooki, yuck. It just smells like trouble from here on out for The Situation. And judging from how miniature Snookie hurled what looked to be a bottle of bronzer aimed at his head which ended up smashing precious Italian glass. [Maybe I'm obsessed with bronzer bottles.] That recipe of disaster is the proof there's something lying deeper between these scorned lovers. Something deeper than their Coscto tubes of hair gel.

The resemblance between Ronnie and Johnny Bravo is becoming more and more apparent. Seriously guys, you work out your upper bodies like machines and neglect the legs? Why?

The rumored MTV-induced car crash involving Snooki and Deena that sent their own security to the hospital.

Vinny will be spending some quality time with that bidet...he's alluded to this.

Ronnie and Sam will ultimately smush. They are the Kelly and Zack Morris of tanned reality television. It's destiny.

Deena and Pauly D will smush also. Those 2 tongues created a flavor no one would want to try.

Going back to aiming for Mike's head, Mike definitely gets the wind knocked out of him at some point this season. Be it MTV's editing effects but it almost seemed like Snooki's season 1 attacker snuck in the house to do it. Odd. 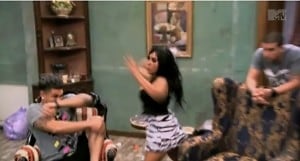 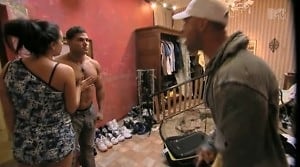 A Better Look At Their Florence Digs

Check out the gallery of their Florence abode. Was MTV saving this space for Real World Italy? The home is reminiscent of former Real World homes from the Paris and London seasons. But whoever designed this had to have been on some kind of Rock Star energy drink binge. Majority of the rooms in the Jersey Shore house have thee most bizarre combination of prints and colors. See the "smush room". The mix of tacky stripes and odd placement of bright colors and plaids can induce several migraines even the strongest of Excedrin could not cure. Enjoy and look forward to our continued coverage from this season.