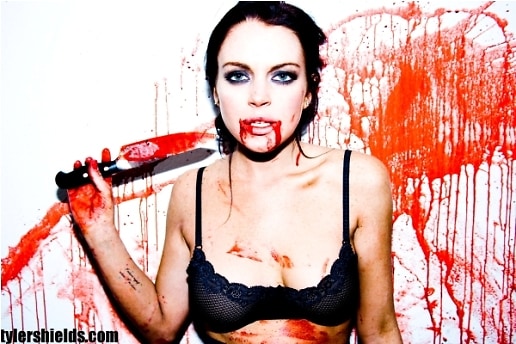 [Lindsay Lohan by Tyler Shields via] A photo of a knife wielding Lindsay Lohan in a bra, blood dripping down her mouth, smeared on her body and splattered across the white wall background: just the product of another day of shooting with L.A.'s Tyler Shields, NBD. After all, this is the same photographer who had a major art opening that counted fully-naked dancing girls among the guests and featured a stunt wherein Shields shot (as in, with a gun) a guard in the chest. By now you've probably become familiar with the edgy photographer's work which usually features young up-and-coming Hollywood talent engaged in sexually-charged, and often violent scenes like this. 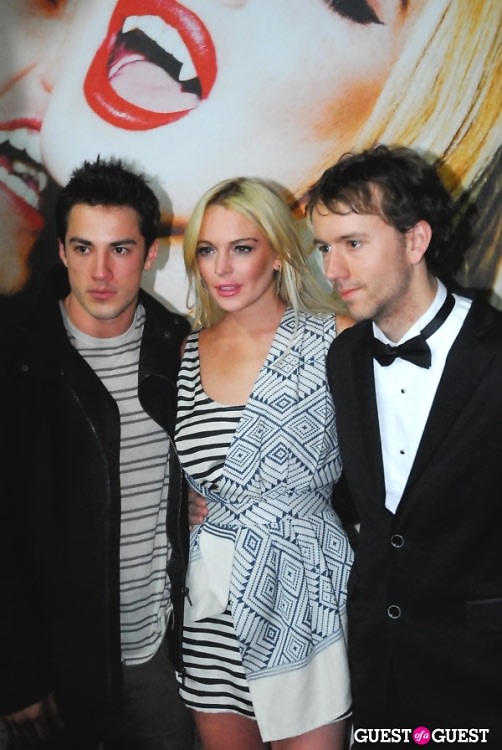 In a recent Art Info interview, the lens master reveals his experience working with Lindsay, what's up with all the blood, writing three novels in 65 hours and many other noteworthy tidbits worth a gander. But, because we care about you, here's a collection of ADD-friendly highlights from the interview...

On how Lindsay Lohan inspires him as an artist:

"She's just so daring. She's a character in herself and she is very good at it. I shoot her a different way than I think anybody else shoots her, and I think she knows that and I know that and I think we compliment each other very well."

On the theme of rape in his work:

"I don't think it's rape! It's more... maybe dominance is a better word than rape. [...] I'm not into the idea of the raping of women, but I think it can be sexy. I think in a dominant situation, dominance can be sexy."

On his feelings about blood which is a recurring theme in his work:

"It's so shocking to people because everybody has blood and everybody has bled or seen someone bleed. [...] It's such a taboo thing: 'Oh my god, there's blood — we have to clean it up, get rid of it.'" 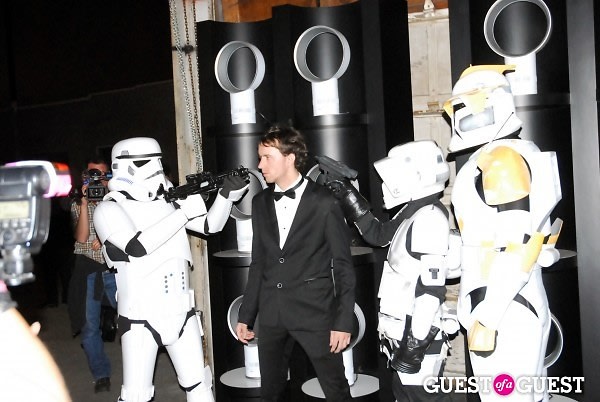 On his interest in young Hollywood whom almost always act as the subjects of his work:

"To me, they're just people. These are just my friends. [...] I never had an interest in, 'Oh, I want to befriend a bunch of celebrities.' That was never what it is."

On his other endeavors outside photography:

"I just wrote three novels. It's a series, and all three are about different things. The first one is called 'The Smartest Man' and it's about the man who becomes the smartest man in the world."

He goes on to explain how it took him 65 hours to write the three novels which he did between the hours of 4am and 6am over the course of a few nights. He wants to turn them into movies.

He did a painting with 20 different people's blood, including that of "Glee" star Jenna Ushkowitz.

Since he couldn't get a doctor to draw their blood, Relativity exec Ryan Kavanaugh paid for a professional to do it as a gift to Tyler, which he describes as possibly "the nicest gift anyone's ever given me."

Another one of Shields' ambitions is to sail around the world solo on an engine-less sail boat.

[Go HERE for more on Tyler Shields and his envelop-pushing action-packed art shows.]