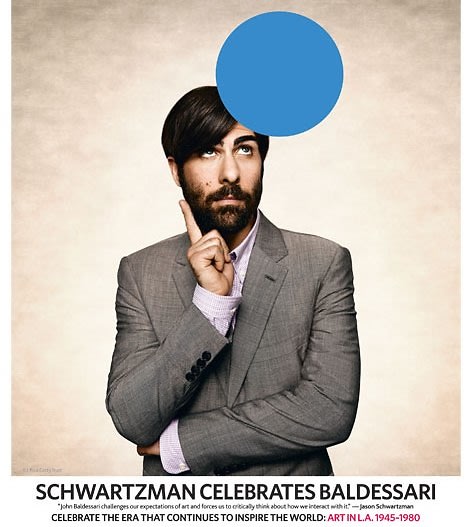 As we get ever closer to the official October launch date of The Getty's sprawling Pacific Standard Time initiative, the preview exhibits and promotional materials continue to surprise, delight, and raise our already intense anticipation. In the newest, just released installment, HBO star and Wes Anderson muse Jason Schwartzman is taught a Chrismas Carol-style lesson about the value of art museums when he is visited by the ghostly apparition of renowned artist John Baldessari. And oh yeah, Jeff Garlin cameo!

Yes, Jason Schwartzman (at least in the video) doesn't like museums, and it's not like he doesn't have something of a point. After all, although we all strive to be cultured beings of pure taste, sometimes there's a lot of pressure to "get" obtuse conceptual art. We've all, at one point in time or another, faked our admiration for some piece of art in order to fit in or look smart. 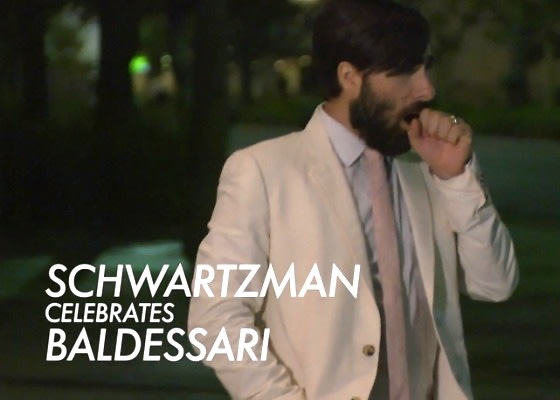 [Photo via] But what John Baldessari's gigantic disembodied head is saying is, that's okay. The whole point of conceptual art is for it to lack narrow definitions, to not come with a guidebook. There should be no pressure to "get it," and disliking something is an equally valid response to liking it.

This is just one fan's opinion, but for a huge, collaborative cross-gallery exhibition dealing with a broad amount of work (Pacific Standard Time, remember, covers the entire emergence of the L.A. art scene between 1945-1980), the PST team is doing a great job of finding the universal themes, reaching out to non-experts, and really capturing the smart, dynamic creativity that has always characterized Southern California art. The next collaboration is reportedly between Ice Cube and influential architect/designer couple Charles and Ray Eames, and the exhibits begin opening en masse starting next week. We can't wait.

[Top photo via, video via]