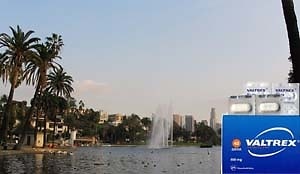 In case you needed another reason never to go in the Echo Park Lake, there's likely a strain of herpes going around that's responsible for the deaths of 200 of its fish. Yes, FATAL FISH HERPES. Fish can have herpes. But theirs can be deadly. Must be such a buzzkill over there for them.  Who knew those Echo Park fish were such dirty sluts!! It's got to be like an underwater swingers colony in that lake. The humanity! And now they're all getting the herp. Guess that party's over. Maybe someone should toss some Valtrex in there.  Humans can't catch the fish herpes but the thought alone should be enough of a deterrent to keep you away from that STD ridden cesspool. I mean... gross.