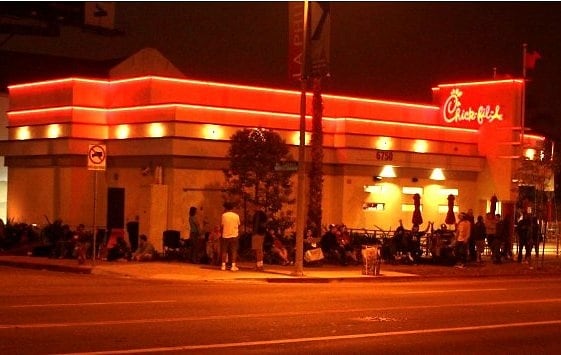 Today, after what feels like years since the announcement the chicken master chain was coming to town, Chick-fil-A Hollywood has opened its doors to the public. I've never had Chick-fil-A but I do enjoy chicken and I hear good things so I'm pretty excited. Probably not as jazzed as the people who literally camped outside in tents to be one of the new location's "First 100" before dawn yesterday, but you know, moderately tickled.

Those campers may be a tic less insane than you might assume one who leaves home and sets up shop on the filthy, filthy ground of the Highland and Sunset intersection for a fast food chicken sandwich to be. As part of the Chick-fil-A tradition of "First 100", every time a new location opens, the first 100 customers (after following the registration protocol and whatnot) are awarded one free Chick-fil-A meal a week for a year. So it's not entirely irrational, right? 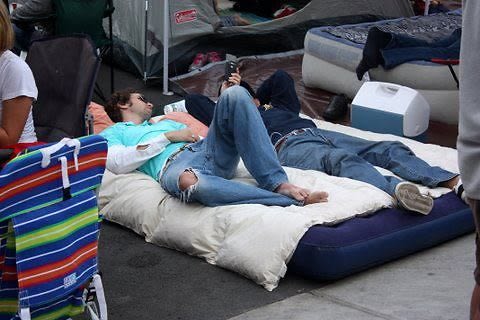 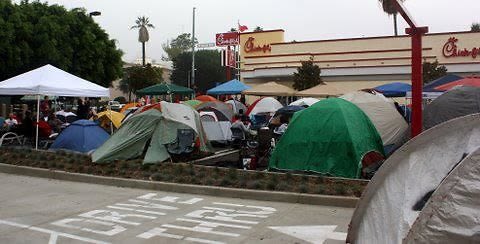 [Photos of campers outside Chick-fil-A Hollywood via]

Don't get me wrong, I'd probably have to be in a gravely dark place in my life to camp out on the abhorrent sidewalks of Hollyweird for a free chicken meal a week. If it comes to that, you know I've given up. But it's not like they camped out of an extreme need to be one of the first ever to know what the exceptional dining experience of Chick-fil-A Hollywood is like. Maybe they got Hepatitis from sleeping on the ground of freakshow Highland, but they also have a year of free chicken, and you don't. 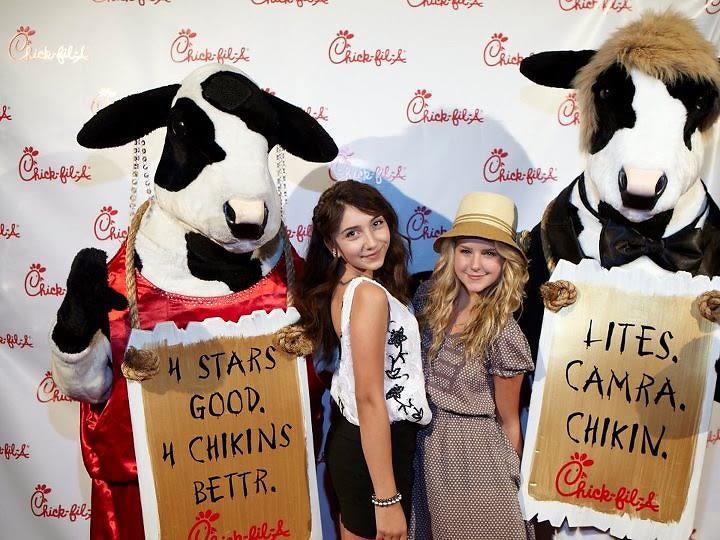 The point is, people are taking the arrival of Chick-fil-A Hollywood very seriously. Last night when I drove by, bouncers were stationed around the perimeter and manning ropes at the entrances. This is obviously a very big deal so you should probably plan your first trip there accordingly; we'd love to know how life-changing it was and if you'll ever be able to eat any other chick again. We'll be there for an early bird dinner tonight and let you know how it goes.