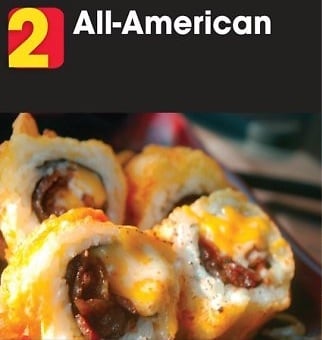 Our gag reflex had a moment when we heard about this hideous culinary crime. The sushi-dealing Yatta-! Truck is serving their All-American, consisting of beef and melted cheese wrapped in seaweed and rice.  The cheeseburger-themed roll marks a new low in the realm of kitschy foods (i.e. Cupcakes A GoGo bringing the desserts to the streets in individual Chinese take-out boxes) offered by mobile eateries that crowd the city's streets.

We're all for epicurean experimentation and even rule-breaking, but this just seems fundamentally wrong.

Not to mention disgusting.

Plus, it's not as if actual cheeseburgers are hard to come by, so if someone was craving the tasty all-American fare, wouldn't they just go get the real thing? We do have to give credit to Yatta-! Truck for crafting up another way of disguising junk food as a healthy choice. Now people can feel like they're eating "lite" since, in their mind, they had sushi, not a cheeseburger, for lunch. Kind of genuis...