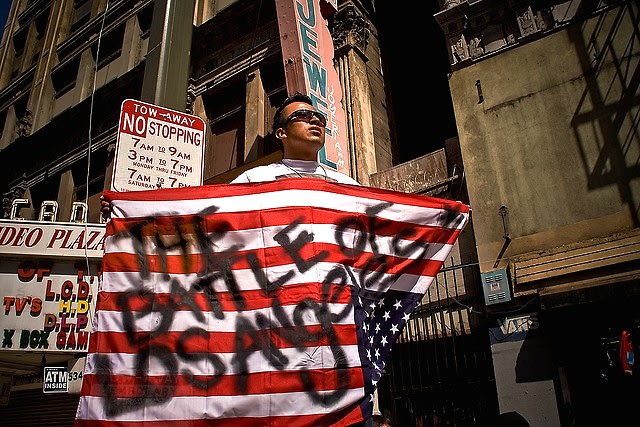 [May Day protest; photo by A.C. Thamer via]

Happy May Day, everyone! Well, maybe "happy" is the wrong greeting to attach. After all, for the Occupy crowd (and anyone who cares about worker's rights), May Day is meant to call attention to the exploitation of the labor force by the privileged elite. Not exactly a cake-and-ice-cream kind of day. But regardless of where your political beliefs fall, you'd do well not to ignore it, because with several massive protests, rallies and marches planned for today, mostly centering around Downtown L.A. and LAX, it's going to affect plenty of us. Read on for our full guide on street closures, delays, and more. 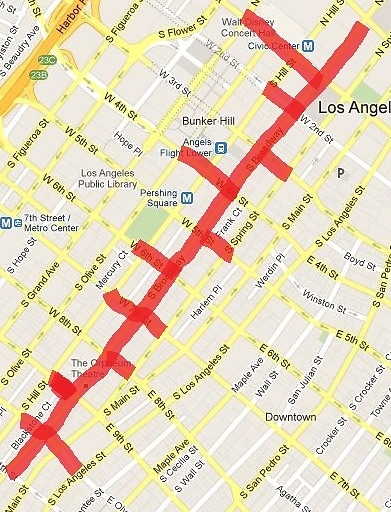 Really, if you work in or around Downtown today, your best piece of advice would be to call in sick, work from home or find some alternate way to avoid the area altogether, but we know that's simply not an option for many. What we will tell you with absolute certainty is to avoid Broadway, which is the centerpiece of the L.A. component of what Occupiers are calling a nationwide general strike. Titled "A Day Without The 99%," this attempt to completely shut down the city is meant to work in concert with the immigration-reform-based protests that L.A. generally experiences on May 1. As a precursor/supplement to the massive rally, which has Broadway and its immediate cross-streets completely closed between Temple and 11th Streets (see our photo illustration on the left), there will be a so-called "Four Winds" caravan of bikes and cars converging on Downtown from four separate directions around 2:30 in the afternoon and then marching en masse on the Financial District.

In other words, and I trust the Occupiers will not take offense to my saying so, this is going to be one absolutely massive clusterfuck and will most likely make normal working life Downtown something of an impossibility. Additionally, the "Four Winds" are planning their approach routes with built-in disruptions, so for more details, check the following links:

"West Wind" will be headed downtown from Santa Monica, mostly along Wilshire, and will be organizing disruptions on Rodeo Drive in Beverly Hills as well as the Bank of America on Wilshire & LaBrea [Full Details]

"South Wind" will be coming from Cal State Dominguez Hills with plans for flashpoint events in Watts, South Central and Vernon, including a demonstation at The Maxine Waters Employment Preparation Center [Full Details]

"North Wind" is coming from the Valley, where they will be marching along Van Nuys Blvd. before cutting down through Chinatown into the city. They plan to protest Congressman Berman's office at the Van Nuys Civic Center, as well as "Occupying The Metro" at Van Nuys & Oxnard [Full Details]

And, of course, there's the general strike and rally at LAX to slow down travel plans. Century Blvd will be closed between noon and 4:00 pm, and LAX officials are advising anyone planning on flying today to give themselves an extra 45 minutes- 1 hour in their airport plans.

That's just about all we know, but we'll update if we get more.