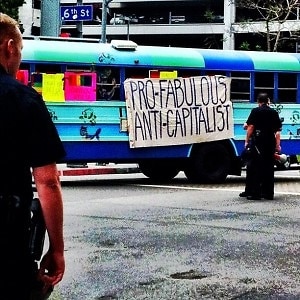 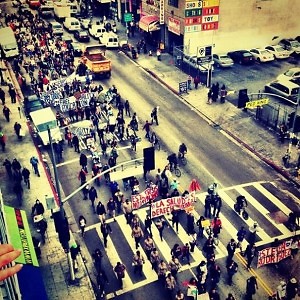 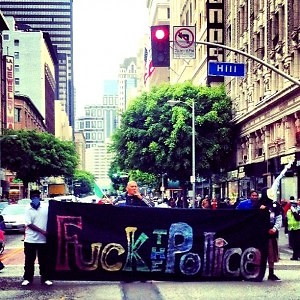 Hopefully you all had a peaceful, nonviolent May Day yesterday if you participated in or were nearby any of the numerous demonstrations and marches that canvased Los Angeles as part of the nationwide general strike. The ultimate goal to shut down all businesses, schools, streets and other day-to-day aspects dubbed "A Day Without The 99%" may not have been met, but Occupiers certainly put quite an impressive dent in L.A.'s infrastructure with their "Four Winds" caravan which brought a parade of bikes and cars from four corners of the city that converged in Downtown L.A. Much like Occupy L.A., thousands poured into the streets—between the many wielding signs, others in costume, some alternative forms of expression, and police—to create some pretty spectacular imagery of the downtown landscape. 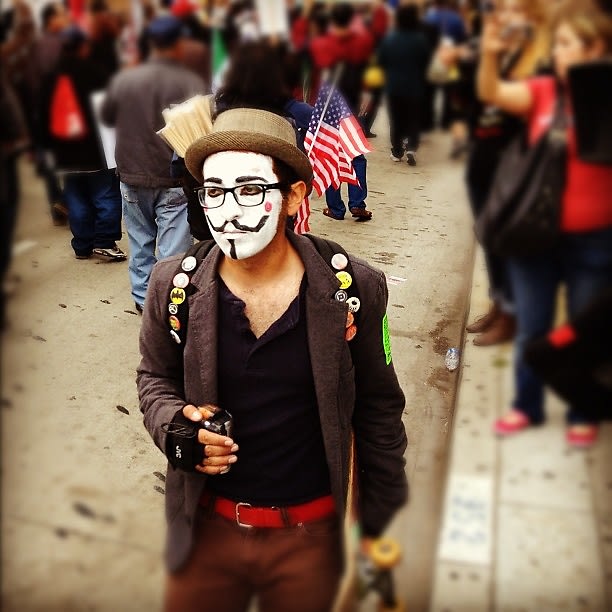 There were reportedly a total of 14 arrests amongst yesterday's protesters as well as some unfortunate physical clashes with police caught on tape, but most seemed to practice non-violent resistance without incident. With so many coming together for various causes ranging from immigrant workers' rights to healthcare, the diverse representation of the 99% yesterday behind one single May Day demonstration was a rare moment of unity, however disparate, amongst Angelenos worth seeing. That's why we've sorted through the wealth of mobile uploads from the trenches to bring you this roundup of the most breathtaking and otherwise noteworthy Instagrams from May Day 2012 in L.A.