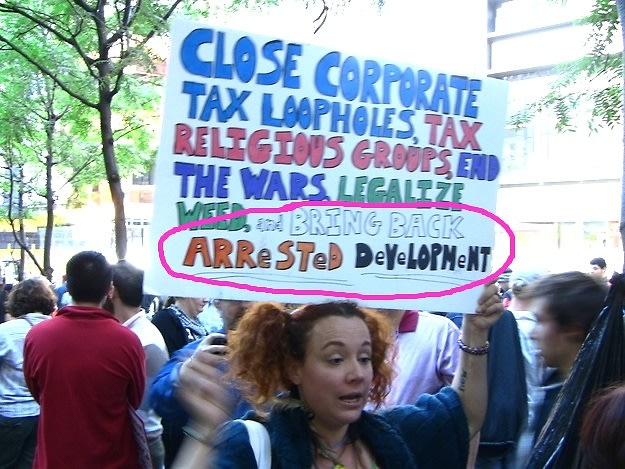 A photo of a sign from one of the #Occupy demonstrations has been circulating the interwebs that we'd like to point out in case you hadn't seen it. Obviously the Occupy movement's message carries great weight and speaks to the greater needs of this country's economic health and well-being. Demands to end our wars and stifle corporate greed have become the major causes behind Occupy protests across the nation. But these demonstrations have also become forums to air some peripheral grievances we can relate to, like the need for more "Arrested Development" in our lives.

I mean, how we have survived on reruns of this TV gem for the last five years is a miracle. The lack of Tobias Fünke and general never-nude action in recent years has been devastating. This woman in the photo urging the return of  "Arrested Development" is one call to action we here at GofG L.A. take seriously and can whole-heartedly get behind. And actually, it's something we've been publicly bitching about for some time now, but now we can stop: while the other demands of Occupy have yet to be met and we have a long road ahead 'til that may happen, at least our voices were heard on this pressing issue as the cast reunited last week to announce an "Arrested" spin-off and movie. 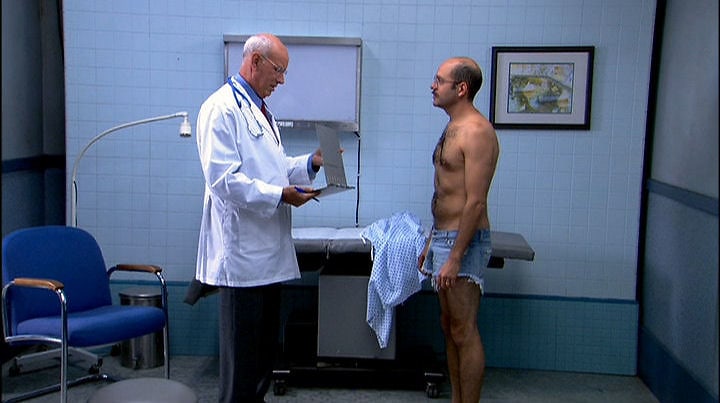 Was it this sign that did it? Maybe. The point is, we eventually got what we wanted. If you truly believe in something and it's worth fighting for, then in the words of Bob Marley and the Wailers, get up, stand up, like the people who have been at it for three weeks in the face of seemingly insurmountable resistance.

Read all about the return of "Arrested Development," some fun facts you never knew about the show the cast revealed last week, and Tobias' mustache HERE.