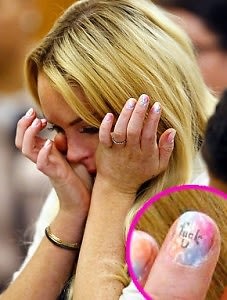 Part of her court attire were the newly airbrushed nails that had "fuck you" written on the middle fingers (how ladylike).  Lindsay later tweeted after her sentence that it "had nothing to do w/court.  It's an airbrush design from a stencil xx."  Of course it wouldn't have anything to do with her dislike for the Judge Marsha N. Revel, right?

Come this friday, it might be a little freaky for Lindsay in her new 'home' or she might even confess to some of her Hollywood drama to her fellow inmates.  But the ultimate survival tip for you Lindsay is you might want to unearth some of those mean girls skills to get by in the 16-year-old Century Regional Detention Facility in Lynwood, Ca (Home to the celebrity mugshots of Paris Hilton, Nicole Richie, and Khole Kardashian).  This definitely will not be a trip down Disney Lane.