The Big Lebowski is like Star Trek: both feature a large, hilarious cast of freaks, and both inspire an intensely devoted fan base who worship every minute detail of their respective universes. We count ourselves among that fanbase, so imagine our excitement upon learning The Dude's legendary Venice crash pad, marmot-friendly bathtub and all, is on the market.

Go HERE to see our post about buying The Dude's sweater.

Go HERE and HERE to see our coverage of Lebowski Fest 2010.

Go HERE for a gratuitous marmot bath scene from The Big Lebowski.

Yes, 606-608 Venezia Ave, a charming little six-unit bungalow style property located a block from The Brig, was once the home of the "other" Jeffrey Lebowski, making it one of the more popular stops on the notorious Venice garden tours. And as you can see, the gardens are a little more maintained than they seem to have been in the early 90's: 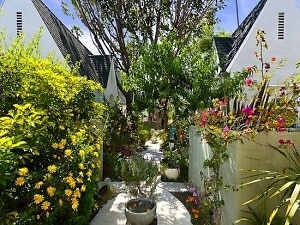 Apparently, the current tenants of the complex include several designers, who collaborated on the gardens and other renovations. Now, LA Weekly seems to think that The Dude wouldn't approve of the aesthetic upgrade, but I highly disagree. The Dude has absolutely no objection to a nice pad, (just ask Jackie Treehorn), and he certainly has no objection to anything that grows in the Earth. In fact, I imagine he would have totally tried to help, as long as he could do a J first. Bottom line, if you're worried that these units no longer have The Dude's seal of approval, don't be. 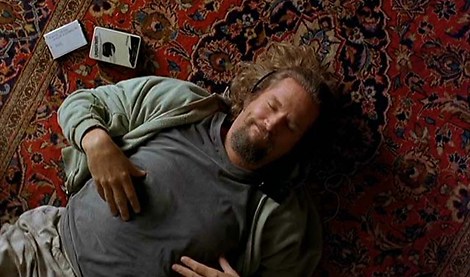 But it's not one unit that's up for sale, it's the entire six-unit complex, at an asking price of $2.3 million. And while that would cost you, or The Dude, a lot of dirty undies, you'd actually be living at least two roles from the movie at once. Because if you own the complex, you also get to be The Dude's landlord, Marty:

Better work on your dance moves.