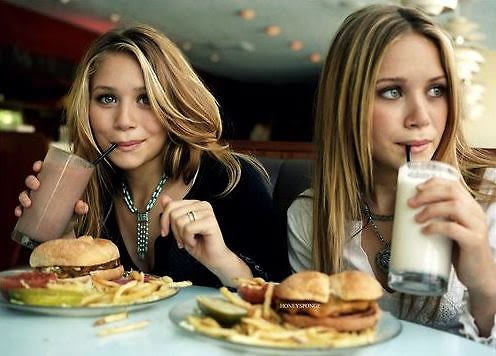 Not to lead you astray from your get-skinny-for-4th-of-July crash diet but today happens to be National Ice Cream Soda Day. The decision to designate such a day just days before an entire nation heads the beaches, parks and pools to prance around in bathing suits was obviously the design of a fat person with an agenda. Nevertheless, it would be a shame, and frankly un-American, not to observe this sacred day honoring the ice cream soda and its cousin, the milkshake. So go park yourself in the sun somewhere on the one day it's okay for you to be a beached whale and sip on the good stuff from one of the fine establishments in this handy guide to L.A.'s best milkshakes and floats.  Oh, and you're welcome for the throwback Olsen Twins shot. [Photo via] 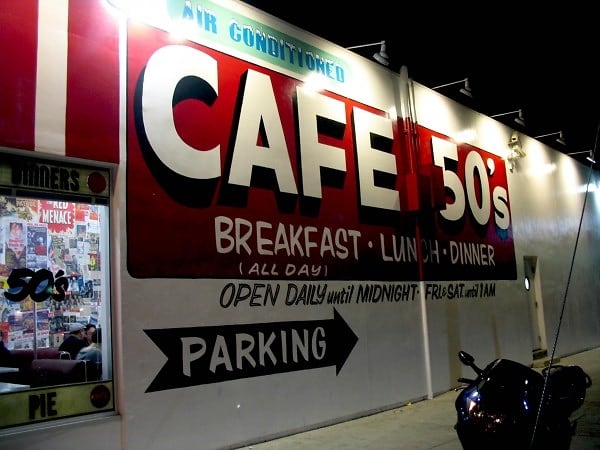 With two locations in L.A., this "Happy Days"-style diner offer soda fountain classics like your choice of ice cream sodas, Black Cows, New York Egg Creams, malts, and of course their milkshakes that have consistently ranked in the top of the town's. Don't bother with the non-fat vanilla yogurt shake, I promise the lack of fat does not make it a "healthy" choice, so if you're doing it at all, just go all the way and get the Double Chocolate Shake. [Photo via] 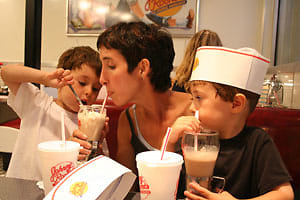 Despite being a national chain, this is my personal favorite for milkshakes. When I was 6-years-old, my dad would take me here on the weekends after my grueling AYSO soccer games where I'd sit down in the middle of the field and pick off my nail polish. To this day I will only get their chocolate shake, but the Johnny Rockets shake menu has expanded since my days as a star athlete and now includes their "deluxe" variety of flavors like Butterfinger, Mocha Fudge, and Strawberry-Banana, all of which also come as malts. [Photo via]

For a more exotic selection than our classic chocolate, vanilla and strawberry flavors, the Persian-style Hollywood ice cream spot serves up signature flavors like Ginger Rosewater, Saffron and Orange Blossom which can come in the form of a refreshing milkshake.

Another 50s-inspired soda fountain located in the carousel on the Santa Monica Pier, this little gem is dedicated to serving up Fosselman's Ice Cream and all of its beautiful derivatives including truly sinful sundaes with all kinds of delicious, like brownies and s'mores. Also on the menu are their equally delightful floats, shakes, ice cream sodas topped with whipped cream, malts, egg creams, or for those who want to live dangerously, the Graveyard Shake and Curious George's Jungle Shake. [Photo via]

In addition to their awesome burgers (served 24/7!), the go-to drunken nom nom spot after a night of partying somewhere in The Roosevelt has something called a Guinness Milkshake. I'm kosher in the sense that I like to take my dairy and alcohol separately so I have never personally tried the adult shake but friends in the office and rave online reviews make it sound like it's worth breaking my rules.  [Guinness Milkshake photo via]