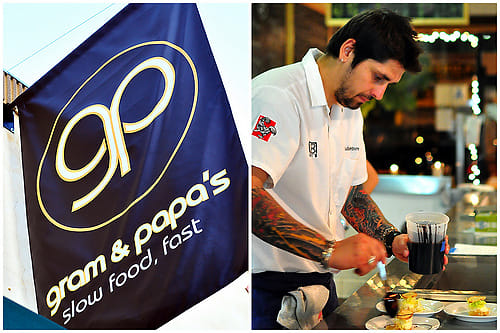 [Photo via] If you think food trucks are the only munchie sources switching up locations, think again, friends! Chef Ludo Lefebvre is back with his fifth installment of LudoBites, a delicious, yet slightly less accessible alternative to taco trucks: a pop-up gourmet restaurant.

Lefebvre's LudoBites has no address; instead, he borrows kitchens in other L.A. restaurants, bringing his amazing culinary skills and menu with him. His traveling restaurant has hit spots like Breadbar and Royal/T, and even packed into a truck to serve his famous fried chicken.

This time, the chef is posting up at Gram & Papas, but good luck trying to taste his treats -- the next two weeks are already sold out. No surprise there. Ludo was the executive chef at luxurious restaurants L'Orangerie and Bastide, has won numerous prestigious cooking awards, was named one of the World's 50 Greatest Chefs by Relais & Chateaux and you might have seen him on Top Chef Masters. Yeah, so pretty much his food is unquestionably delish. 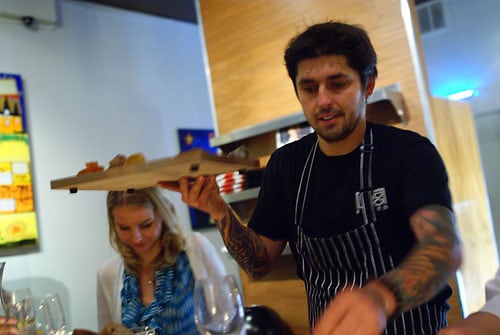 For LudoBites 5.0, the menu is nothing short of mouth-watering. Some standout dishes that make our stomachs rumble include somen noodles with peanut vinaigrette and candied watermelon, hot foie gras with Chinese bbq sauce, goat cheese soup with bacon and green apple, and campfire smoked s'mores with caramel souffle. Hungry? Too bad the rest of the reservations aren't available until Saturday. But don't fret, you can dig into Ludo's Gram & Papas menu until September 3rd!