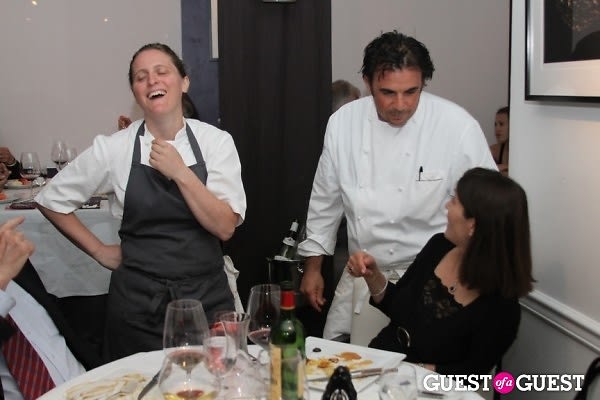 Go HERE for more photos by LIZA and tag yourself and your friends!

Lucky diners, who made their reservations way in advance, got a very special treat from the right coast last night when NYC superstar chef April Bloomfield took over Santa Monica's Two Michelin Star-winning French favorite, Melisse. The culinary master ruled the L.A. kitchen as she made a six course meal to benefit the Special Olympics.

Guests enjoyed a pre-fixe menu which included heirloom tomato gazpacho and prime New York steak and short rib, among the night's other delicacies. As if you weren't drooling already, the meal was topped off by a strawberry, basil, and pistachio creation for dessert.  Each course also came with a preselected French or Italian wine handpicked by Bloomfield to complement her food being served. For those of you counting at home, that means six glasses of vino in one sitting, which apparently wasn't enough to leave anyone in this crowd passed out under the table like we would've been after four...

When the chef isn't working in the two restaurants she co-owns in New York,  The Spotted Pig and The Breslin, she's busy writing her new cookbook called A Girl and Her Pig. But Bloomfield took a break from all that and treated some lucky Angelenos to a meal they will never forget.