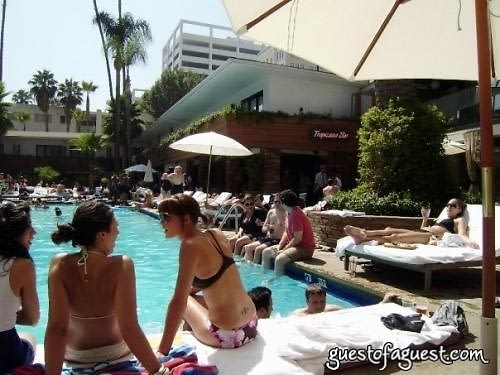 Go HERE for more pictures and TAG YOURSELF!

Every year, we take a fourth of July road trip and this year we decided to head to Los Angeles. We arrived thursday afternoon and before we checked into our hotel we headed to In-N-Out to fill up on our favorite snack. We're not big fast food eaters but we can't stop craving the double cheeseburgers made animal style. Afterwards, we headed up the street and checked into our room at the historic Roosevelt Hotel.

After a quick shower and change we were off to meet Susie Castillo, her husband Matt Leslie and Susie's visiting sister Yori. Susie recently wrote her first book "Confidence is Queen" and before we went out Susie showed us copies of the book. One of our photographer's, Phil Mucci, shot the cover and she even thanks Scott in the acknowledgements.

We hand dinner at Little Door and after headed over to Villa Lounge. Our friend, Stephan Fernandez manages Villa and brought us in and sat us at our table. We had a few cocktails and a little dance, but succumbed to jetlag and headed to bed.

In the morning we met at our all time favorite breakfast place, Griddle on Sunset. After an amazing breakfast, worth the long wait, we headed to Malibu.

Last year Fingerprint Communication's Greg Link, in collaboration with Polaroid, sponsored a house in Malibu that became simply known as the Polaroid Beach House. If you watched television, read any magazine or surfed the internet you couldn't escape the stories about the house and the exploits of those in attendance. This year, they have a new location, new sponsors and a new name-Project Beach House.

You may have heard that residents of Malibu were less than thrilled with the paparazzi and traffic problems caused last year by the house, so this season's house is a little further up. In a bigger is better world, this house certainly doesn't disappoint. The house features a separate parking lot, a hotel sized swimming pool, a huge yard for dancing, three bars, a barbeque with chef on hand and a live DJ.

We were treated to everything you could want and spent the day sunning, swimming, and dancing. At the end of the night we had the best seat in all of malibu for some spectacular fireworks. The house is on a large cliff so we were able to enjoy the fireworks that were set up for the house as well as those in Malibu and Santa Monica. As we headed out, we ran into Greg who invited us back the next day for a more low key affair.

We came back to Malibu on Saturday and instead of 900 people, spent the day with about 20. We still had a bartender but this day Greg was our dj and we were treated to a gourmet meal by the in house chef. After a late lunch, we all grabbed some blankets and sat outside and watched the sunset. We wanted to stay later but had dinner reservations in Los Angeles, and had to head back.

That night we had dinner reservations at STK/LA courtesy of Taranasha and Michael of STK/NY. AT STK we met our baby Leven Rambin. You may have heard that Leven recently became a series regular on "The Sarah Connor Chronicles," and we couldn't be more proud. We were joined by a relatively new friend Bianca Levin. We met Bianca at this year's Operation Smile and have since kept in touch. After dinner, the four of us we were escorted next door to the new spot Coco Deville. We were told that there are plans for the club to have an outpost in New York City soon. We stayed for a drink and then headed over to check out The Crown Club. We love this spot by the same owners of Winston, and stayed for a little to soak in the crowd and frat-like ambiance before calling it a night.

Our last full day we decided to spend the day at our hotel. What we didn't know is that the pool is quite a big scene on Sunday and were a little surprised by the quantity of people on hand. We said "what the hell" and threw good as well as fashion sense out the window and hung with the predominantly Eddie Hardy clad crowd. Since we fly back in the morning we stayed in and are saying our good nights. Another great holiday....