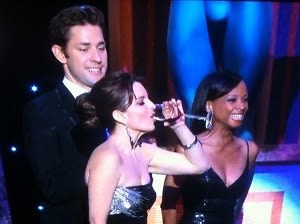 Congratulations to the cast of The Help, which bagged Best Actress, Best Supporting Actress, and Best Ensemble Cast last night at the 18th Annual Screen Actors Guild Awards, the boozy step-daughter of the Academy. Since the SAG comprises 22% of the Academy Awards vote, this could also bode well for the film in scoring a few Oscars.  A complete list of winners (Betty White! Alec Baldwin! Mary Tyler Moore!), and highlights from the evening (including the Bridesmaids/Scorsese drinking game), after the jump.