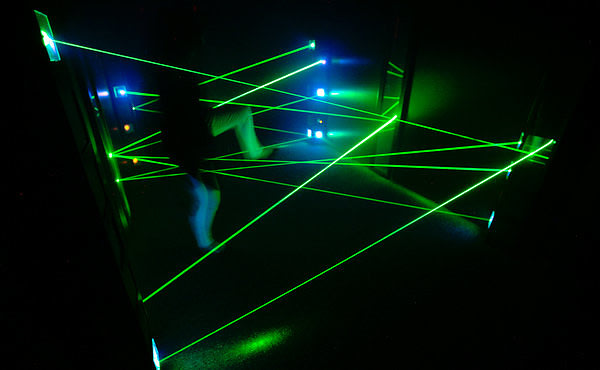 At a new exhibit that opened on Friday at Discovery Times Square, guests can explore the inner-workings of the largely unknown world of spies.

The exhibit, called "Spy: Secret World of Espionage," combines traditional displays of various gadgets used by US spies over the past century, as well as interactive stations where guests can alter their voices, navigate through laser beams, and create their own disguises.

This is the first exhibit to provide such insight into the history of espionage, and most of the devices on display were used during or before the Cold War, and therefore lack the technology one might expect to see in such tools.

According to the Times, some of the highlights of the exhibit are:

"...objects ranging from a poisoned needle, hidden inside a coin, to a fragment of the United States Embassy in Moscow that the Soviets riddled with bugs during its construction in the 1980s...there is a K.G.B. model of the umbrella that injected a poison ricin pellet into the Bulgarian defector Georgi Markov in 1978; a handmade pair of shoes made for a United States ambassador to Czechoslovakia in the 1960s that Czech intelligence officers bugged with a listening device in the heel."

The gadgets are only part of the story though, and the exhibit is pulled together nicely by the stories of the real spies -- mostly ones who were caught -- who used these devices in their work.

The exhibit is open at Discovery Times Square until March 31, 2013, so head over to check it out, or click HERE to learn more.