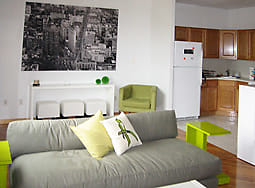 Five top students from portfolio schools have been hand-picked for an internship program that's been dubbed "The Apartment," in which the youngsters work for MRM while living in a loft apartment for six-months totally rent-free. The five graduates who range between 21-27 years old will live, commute and work together on global accounts.

For a few interns starting out in the business, the three-bedroom Brooklyn apartment -- fully furnished by Ikea and CB2, could very well be a pad decked out in The Real World or any other multitude of MTV reality shows- as it includes a flat-screen TV, free cable, and a large outdoor deck fully equipped with barbecue equipment, overlooking the Manhattan skyline.

Luckily, unlike MTV crash pads, being able to stay in the apartment wont involve cameras following their moves 24/7 and also allows the interns to be fully immersed at MRM without the usual hassle interns in NYC face - little or no money to pay for NYC rent!

Adding in another reality show dose - after their six months of rent free livin', the most talented intern will score a full-time paid job with the company. So therefore, you can also consider this a "Survivor" house.

Word of warning to the competing interns: we would recommend avoiding roommate made curry, especially before any work day that consists of important meetings, tests or pitches!

Being an advertising company, of course the interns wont just be working on accounts, but are also expected to tweet and blog on their "Apartment" experience, which you can follow at theapartment.posterous.com and @MRMers.

We are sure that MRM will see their list of potential future interns increase ten-fold with such a worthwhile enticement! 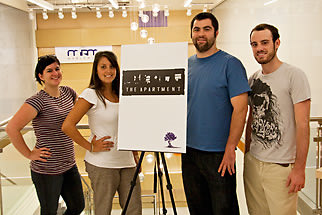 Interns for "The Apartment"

[The Apartment Photos Via]