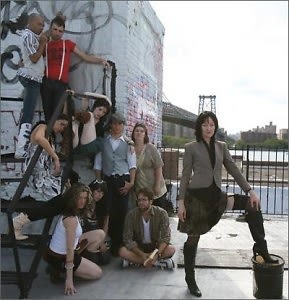 The hipster "subculture" is famously fond of thinking of and discussing everything in detached, ironic air quotes. Just skim any Hipster Runoff post for proof. Now, "norm" news agencies have caught on and gone meta by bracketing the word hipster in gratuitous quotation marks.

Today's example comes from a 1010 Wins report on a tennis court renovation in Williamsburg-Greenpoint hipster breeding ground McCarren Park. Juliet Papa notes the North Brooklyn tribes that united to clean up the court:

"Williamsburg 'hipsters' and the Polish community banded together and voilà!"

Dig deeper and you'll find that some slight tweaks to Papa's audio report on the cleanup make for a wry hidden commentary on the "hipsters" she's clearly weary of:

"McCarren Park's tennis courts hipsters are busy on the weekends, but they're also a mess! Cracked [out] and chipped [emaciated] surfaces [devoid of souls], sagging nets [post-yayo lows].

She interviews one of the activist tennis-philes, who says:

"The City hasn't repaired the courts hipsters in about 20 years."

He goes on to suggest increased city funding:

"Hopefully now the city will see that we're serious and hopefully give us some money toward the rest of them."

It's a gripe that calls to mind hipster moans about a city government that ignored them, which led to a census "boycott" (who are we kidding, a hipster would never approve of something so organized as a boycott; the hipster simply stuck the census forms in the spokes of his fixie) which in turn led to...further decreased visibility in City Hall.

There are a couple of "conclusions" you can draw from this: 1010 doesn't take hipsters seriously enough to mention them sans quotes; 1010 doesn't think real deal hipsters would give a damn about a yuppie nirvana like a tennis court (those are for the hipster moms and dads financing their kids' busy weekend "habits").

Or maybe it's a sign of respect, a development that suggests hipsters are finally getting their due. In which case, expect hipsters to mock the favor.