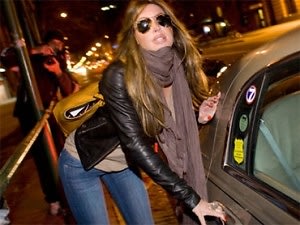 While the details surrounding the Tiger Woods post Thanksgiving domestic auto mishap are still murky, it appears there may be a mistress involved name Rachel Uchitel. It is rumored that the squeaky clean Woods is very "friendly" with Miss Uchitel, so friendly that Wood's wife picked up a golf club and started swinging at him at the dinner table.

Uchitel is a curious character in her own right.  A former Bloomberg television producer, her fiance was tragically killed in 9/11, causing her to suffer a self-described "breakdown".  She eventually reinvented herself in the nightlife world, working VIP relations for Pink Elephant in NYC, Tao in Las Vegas, and most recently was a short-lived partner at the Griffin in NYC.

It was at the Griffin where she was reportedly "rubbing shoulders with Woods" in June of this year.  Her "relations" with clients have garnered her quite some home-wrecker infamy, starting with an affair with married television actor David Boreanaz. Nevertheless, Uchitel has been somewhat tight-lipped about her fame-whoring ways, stating that she "never kisses and tells".  That being said, she has been snapped with the likes of Steven Dorff, perennial D-list wrangler, and Ryan Seacrest to name a few or her high-profile friends (romances?). 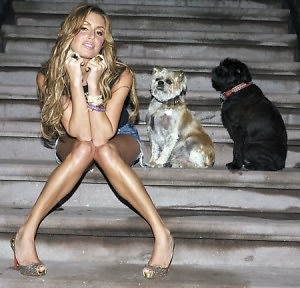 In the summer of 2007, when Rachel worked the door at the Southampton nightclub Dune, she told the Newsday that her favorite line was when people say to her:

“Rachel told me to come by.” “Dude,” she says, “I’m Rachel, and that’s the most idiotic thing you can say.”