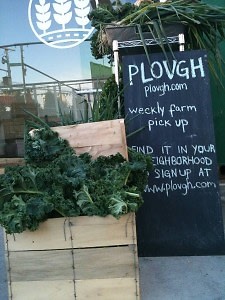 Who knew that the farming world had a trend? Well, Mallory Sustick, a Brooklyn bartender, works like a dog to maintain, promote and advance the online farmer's market startup Plovgh that began after noticing a need for more local farm market distribution.

The "v" stands for "u" to spell Plough, like the farmers tool as well as symbolize the actual tool that happens to look like a "v." Plovgh has grown to now host 9 pick up points, including Tuffet where Mallory whips up some tasty beverages on the side. Mallory sat down with me to go over how her unpaid internship landed her a hired position by an entity that aims to take the local farm market to the next level. Read why this organization is different and more beneficial than your typical farmers market or CSA box.

How did you first get started at Plovgh?

I was their social media intern. I found them on Good Food jobs.

So you didn't know either of the founders?

Nope. They're both from the Midwest. Lizzy is from Indianapolis and Nikki, who is one of the co-founders from the beginning, I think she's from North Dakota.

Did they start the site out West?

No. Lizzy has an agriculture background, she grew up with beef and cattle farming. Then she was doing stuff with developmental housing and then she went to MIT and got a degree in agriculture and future markets I think. She worked on a couple farms, and was actually out in India at one point and basically she found this trend of farms saying that they didn't have the markets they needed and they were not growing to their capacity. Like, if they had other markets they would grow more. So it was like they were being spread too thin and if they had their CSA and farmers market to go to then they weren't spending enough time at the farm. The marketing distribution was a constant problem she was seeing. It's also really hard for smaller scale farms to become valuable.

It's small scale in the sense that is not the size of the farm but in their practices. Smaller scale farms are generally practicing more regenerative farming which is basically making sure the land doesn't become eroded and that [their farming] betters the entire ecosystem. The NYT did an article recently about how even though farms are farming organically, it doesn't necessarily mean that their practices are like in good concern for the land.

Where are most of them located?

Right now ones that we've been working with are on Long Island on the East End, Hudson Valley, and Upstate New York. Basically the idea of Plovgh is that it's a self organizing tool, so neighborhoods can create pick up points and then networks of farms can self organize so once the site is launched you can be getting stuff from New Jersey farms, Pennsylvania farms, and anywhere in the general Tri-state area.

Cool, and then are you guys going to try and make it national?

Yeah. Lizzie is doing some work right now with Mississippi farmers and seeing that there's definitely a need for something similar to what we're doing here in New York. We've talked to farms in Oregon, we were out in Northern Iowa last summer, which was crazy, it was the first time I was in the Midwest. We're trying to get to Iowa and start doing something this summer. but the focus right now is to get New York up and running. 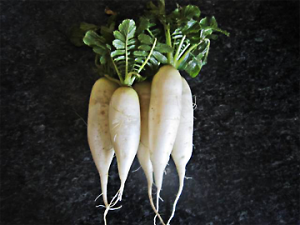 How has New York been doing? Have you guys been getting a good amount of response?

Recently, it's been pretty good. I don't know what happened since the New Year but we've gotten a lot of people making pick up points which is a big form of the interest. We like to think of it as having pick up points and like fueling entrepreneurism in organizers so people take on this responsibility of organizing a community around it and identifying a location

What makes these pick up points different from a farmer's market?

The pick up points are right now generally once a week and it's a 2-hr window. So you could have a pick up point here [at Think Coffee] in the backroom on Friday afternoons from 2-4 or something like that. The organizer will have a list of all the names and their orders. We just started implementing this, but I know when the site is built, in order to make an order you'll pre-pay. 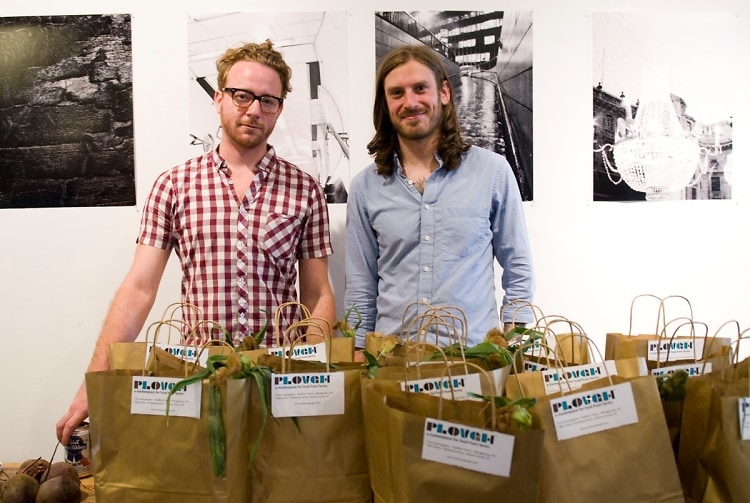 [From the tech & design team, Blue and Michael smile nice when you come pick up your Plovgh order]

Right now we send out a paypal link afterward the order but we're trying to get people comfortable with that idea [of pre-paying] because it's a big part for the farms so they're not harvesting and driving in anything without knowing that they're paid. As opposed to farmer's markets where they have this huge risk of driving in all their produce, spending the entire day there and then most likely driving home with all this excess and it going to waste.

What about reaching out to restaurants?

Right now we're focusing on individuals. It's definitely not something we're not considering but our main mission I think is to increase access for individuals and families.

As the crops come in and out of season, how do you filter the farms and their produce?

Our site is going to be a marketplace. We're not going to curate anything. So if there's four farms on there selling apples, the shopper is going to make her decision based off their farm profile or it might be the farm's practices. That's basically the idea. It's a like a weird term to use but it's like a free market.

How many members do you guys have right now?

We have over 1,000 people on our mailing list in New York alone. On a weekly buying basis there's 30-40 people that are buying amongst the pick up points. 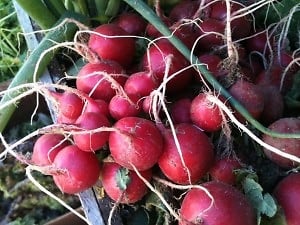 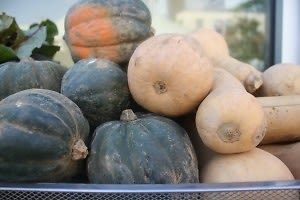 Now, those are some tasty looking locally grown starches!

Since the website isn't up and running, how are people doing this? How are they buying?

When you click on the email there's an order button and it's basically like a google site still but you choose your quantity. You can get a variety and that's how it's different from CSAs. Do you know what CSAs are?

They're Community Supported Agriculture which is basically, at the beginning of the season you pay a certain amount of money for a full share or half share and every week you get a box of food but you don't really have a say in what that box of food contains, it's just what the farm gives you. We're working with this farm out in the Hudson Valley and they want to have better connectivity with their buyers so we brain stormed this alternative to the traditional CSA method.

Farms need seed money to literally start planting so customers invest in the farm and then get a discounted price but then you get to pick each week what gets planted. It's kind of like a CSA but with more choice.

So are you guys going to have any events in the future?

I think we're going to do a launch party when the website is finished. As we get different partners and pick up more points, too.

If Plovgh could identify with one place in New York what would it be?

I don't know if they're going to agree with me but I'd say Vinegar Hill House in Brooklyn it's really it has this really natural and homey feel to it and it feels kind of like you're eating dinner at a friends house rather than a restaurant. And the chefs there buy from farms and it's menu is based off what's in season.

[All photos via Mallory Sustick]