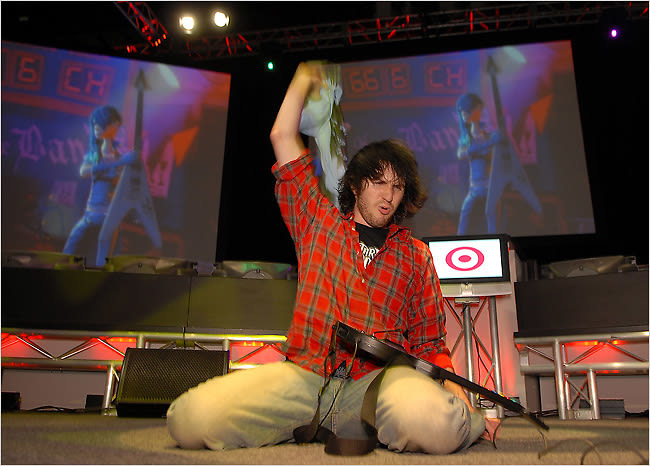 This holiday season we aren't too concerned with who the GOP or Democratic front-runners are (Hillary or Obama? Rudy or Mitt?), or if/when the lights will be turned back on Broadway, or which game system will sell more (X-Box 360 or Playstation 3). Nope, we are much more interested in the rivalry between Guitar Hero III: Legends of Rock and MTV's Rock Band. Which game is going to win out? It seems like Guitar Hero has the advantage, being the 3rd game in its series, and it being featured on Gossip Girl which is a major plus for us.

We are also kinda annoyed and tired of MTV. The VMA's suck, there are no music videos, and their reality shows are stale (A shot at Love with Tela Tequila, are you joking?!) to name a few things....(Run's House is pretty funny though).  For these reasons (and a host of others) we aren't super pumped to buy one of their game titles.

But all this guitar game talk got us thinking. So remember when you saw all those poor bastards who wasted days waiting for Black Friday sales, and you thought to yourself, "well at least think of the several hundreds of dollars they saved?" And then immediately after you thought to yourself, "think of all the hundreds of dollars they would have saved if they didn't buy that crap in the first place?" Well having now witnessed people playing wasting hours and hours learning how become a guitar game master, we can't help but ask ourselves "imagine if you just bought a guitar and instead of playing a game, learned that actual instrument!?"