Bacon may have hit a high point when it moved from breakfast staple to Internet meme last year, spawning a thousand products to make Wilbur shudder.  But just because it's played out, doesn't mean it doesn't taste damn good. Combine it with vodka, and it nears perfection. Trust us, a bottle of Bakon will be a much bigger hit at your Holiday party than another bottle of wine. 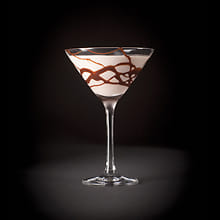 The Bakon website states the liquor has "no obnoxious smoky or chemical flavors," and we're inclined to believe them since they've won several legitimate awards.

Seriously, meat in a cocktail has never sounded so good. Combine it with Scotch to make what is perhaps the most manly drink ever. Or, add Eggnog for a festive winter treat. Using it in a Bloody Mary is said to be the best, but could be hard to get right if you're not a skilled bartender. To create a chocolate and bacon flavored Martini all you need to do is squeeze some Nestle syrup in and you are good to go!

Sounds good, right? Besides taste has two other huge bonuses:

1) It's not made of real bacon, which is kind of gross and yet kind of less gross than if it had the actual ingredient. Anyway, point is, your vegetarian and vegan friends can enjoy it!

2) Having seven of these has fewer calories than eating seven portions of bacon. That's the kind of math you can actually compute and feel good about the next morning when you're hungover.