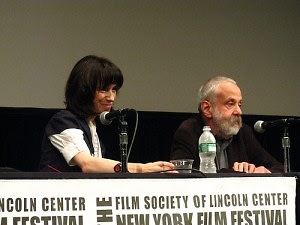 You might think there's nothing more painful than a Q&A session where no one asks any questions. But especially in New York, and particularly in New York press conference situations, a deafening silence is preferable to occasions where audience members regrettably speak up.

Sometimes it seems that the more ostensibly sophisticated the audience, the more cringe-inducing the Q&A. At New York art houses, people asking questions feel the need to broadcast their own perceptiveness and enlightened understanding of the film at hand.

This was brought into eye rolling relief yesterday at Lincoln Center when British director Mike Leigh fielded questions after a New York Film Festival press and industry screening of his latest, Another Year. Now, Leigh might have been having a rough day. He was very possibly jet lagged (if his movies are any indication, the man rarely leaves the Old Smoke). The weather was atrocious, though that should have made him feel at home. And, in defense of the critics, the screening did begin at 9am.

Still, consider this a lesson in what not to ask during a press conference, especially when it's clear from the outset that the man you're asking woke up on the wrong side of the bed:

1) Do not feign familiarity with the speaker's work in a bid to impress the speaker. You'd think that a Mike Leigh play called Abigail's Party would include a character named Abigail. But if you'd actually seen it, you might discover no such character is introduced. And that comparing the Mary character in Another Year to the nonexistent titular heroine of Abigail's Party would result in Leigh telling you that you're actually thinking of the role of Beverly, that he sees absolutely no relation between Beverly and Mary and that he is so dumbfounded by the comparison as to "never give it another thought."

2) Do not burrow your head into your iPad the moment after you ask a question and the speaker begins to answer it. The right speaker (in this case, Leigh) will call you out on it. And the rest of the audience will applaud his admonition. (On a similar note, give it a rest with the Flip cams. Lincoln Center has a cameraman with a tripod to document this stuff better than you can and make it available on the internet.)

3) Do not ask about the symbolic importance of a shot of a speeding train during a transitional moment in a film.

4) Do not begin a question by saying, "I was trying to think of the most irritating question I could possibly ask you. But I decided I'd ask something worthwhile as opposed to seeing if you'd intentionally put something in your own movie." This introduction is particularly dangerous if followed by an idiotic question, to which Leigh will likely say, "I don't think I should take up time answering that."

5) If at a Q&A featuring actresses of a certain age, do not voice your astonishment at "watching women with obviously real faces on the big screen." It's just awkward, though Leigh's ladies (the very attractive Lesley Manville and Ruth Sheen) handled it with typical, subtly withering British aplomb.