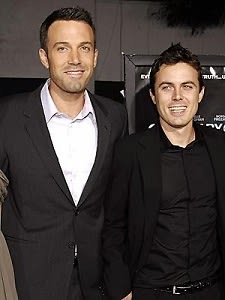 Unlike many famous relatives, the Brothers Affleck seem to get along famously. They've co-starred in three movies and avoided public acrimony. And both directed just released films--Ben's The Town and Casey's I'm Still Here. Now, in hopes of igniting a family feud, let's decide who comes out on top. Some comparisons:

Movies: Ben Affleck's The Town , a Bahston-set crime drama vs Casey's I'm Still Here, a non-fiction (or is it?) record of pal Joaquin Phoenix's mind going to seed and body to flesh. Actually, Casey just surprised very few people by saying the whole thing was a hoax.

Critical Receptions: 92% Rotten Tomatos rating for The Town vs 57% for I'm Still Here. (You can read my thoughts on I'm Still Here here.)

At first glance, Ben's movie emerges as the clear victor. However, even after Gone Baby Gone, his debut directing triumph, the elder Affleck (38 to Casey's 35) continues to seek career redemption for sins ranging from Armageddon to dating Jennifer Lopez.

But, no, I'll still say that Ben wins this battle, if not the war. And I'd like to encourage Casey to stick with acting, where he has excelled way beyond his older bro. Or at least direct a movie where it's clear if people are acting or not.