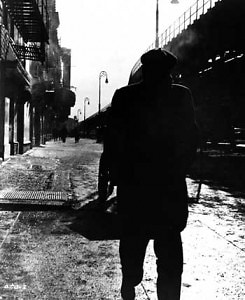 We recently charted the history of the post-glitz Bowery. This week at Film Forum you can check out Lionel Rogosin's On the Bowery and see the fabled, once dirty boulevard 50 years before its gentrification went into warp speed. The drunks on display here won't be staggering out of a party at the Varvatos store. Playing September 17-23, On the Bowery captures three days in the life of America's most famous skid row in its 1956 subprime, as seen through the not-quite-yet-jaundiced eyes of arriviste Ray Salyer. Shot in black and white by Richard Bagley, the film captures the Bowery before it straddled a weird gray zone between Madison Avenue glamor and whatever's left of downtown grime.

Rogosin sketched out a bare-bones plot that non-professional, real deal Bowery bums filled in with improvised dialogue. Calling it a pure documentary set On the Bowery apart from the verité movies coming out of Italy at the time and makes it a progenitor of mockumentaries, Mike Leigh films and the many how-real-is-this docs like Exit Through the Gift Shop, I'm Still Here and Catfish that are currently plaguing theaters.

On the Bowery is ahead of its time, but also evidence of the old "the more things change..." maxim. Consider Film Forum's notes on the movie and the street it profiles:

"...men being rousted by the cops, being kicked out of bars, arguing at the top of their lungs; men listening to patently sincere pep talks from recovered drunks..."

Sounds like a typical Thursday night outside B Bar. Or Pulino's. Or Mars Bar, on 2nd Avenue in address, but Ye Olde Bowery at heart. Prepare for the show by watching the hookers and dealers of 42nd Street in Taxi Driver and hearing about the gigolos that used to prowl "53rd and 3rd" from the Ramones to remind you of how different things are now and make you wonder if it's for the better.