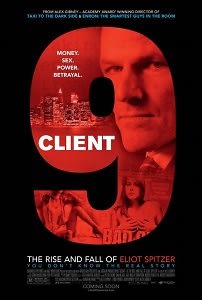 CNN's new show Parker Spitzer is an attempt to revive the flailing network, as well as Elliot Spitzer's hooker-dampened career. Could the new documentary which rehashes the scandal,  Client 9: the Rise and Fall of Eliot Spitzer, premiering today in New York, hurt his chances of cable news stardom?

From summaries, the film seems to be more than just the expected money, power, sex, Ashley Dupre, and politics. While reminding the public of a salacious story that is just barely out of the limelight, Director Alex Gibney moves back in time to when the former Governor was known more for his tough stance on overpaid CEO's and the pharmaceutical industry than his sexual preferences. A strong case is supposedly made that Spitzer was the victim of a conspiracy to take down his career, though I don't think anyone could argue he was manipulated into the fateful meeting at the Mayflower Hotel.

With a rating of 71% on Rotten Tomatoes and generally good reviews, this film could actually help Spitzer and sway public perception to view him as a sympathetic and complicated figure rather than just Client #9 or the guy making his crying wife, Silda, stand next to him at a press conference. Perhaps the ol' everyone has urges excuse holds water? He was a powerful man with powerful enemies who played hardball, which makes it worth overlooking an indiscretion or eight?

At any rate, it will give Dupre another shot to try and jump start her career. Expect a rap song/Playboy spread/newspaper column/ridiculous item of self-promotion to hit the web any day.

The film hits theaters Nov. 5 and is available now on iTunes.