HBO is finally giving Entourage's East Coast counterparts a show. "How to Make It in America" has already started production in NYC and we just got a copy of the final cast list (see below) for today's taping. We are getting more than a little excited to see what new gem Mark Walberg's production company "Closest to the Hole" has in store. Bryan Greenburg, Victor Rasuk, Lake Bell, and Kid Cudi are expected to win us over as they try to "make it" as entrepreneurs living in downtown NYC. 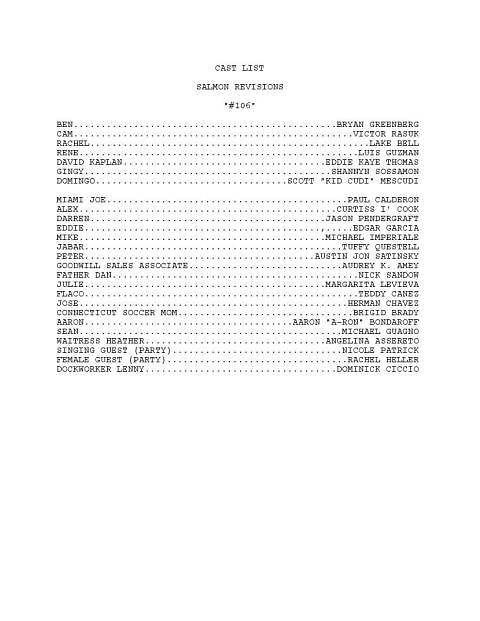 The full cast list (above) that is involved in today's filming. HBO has signed on for eight episodes of "How to Make It in America," which will begin airing in February.

More on the show:

"How to Make It in America" follows two enterprising Brooklyn twentysomethings as they hustle their way through New York City, determined to achieve the American Dream. Trying to make a name for themselves in New York's competitive fashion scene, Ben Epstein (Greenberg) and his friend and business partner Cam Calderon (Rasuk) use their street knowledge and connections to bring their ambitions to fruition. With the help of Cam's cousin Rene (Guzman), who is trying to market his own high-energy drink, and their well-connected friend Domingo ("Kid Cudi"), the burgeoning entrepreneurs set out to make it big, encountering obstacles along the way that will require all their ingenuity to overcome. "How to Make It in America" also stars Lake Bell as Ben's ex-girlfriend Rachel, who is concentrating on her own career and a new relationship; Martha Plimpton ("Beautiful Girls," "200 Cigarettes") as Rachel's boss Edie, an eccentric interior designer; Shannyn Sossamon ("40 Days and 40 Nights," "The Holiday") as Gingy, Ben and Cam's artsy friend; and Eddie Kaye Thomas ("Nick and Norah's Infinite Playlist," "American Pie") as David Kaplan, a successful hedge fund manager and high school friend of Ben's.

Creator and first-time writer Ian Edelman is collaborating with Emmy nominee Rob Weiss ("Entourage") on many of the show's scripts. The pilot and other episodes of the show are being directed by Julian Farino. Additional writers and directors will be announced as they are confirmed.