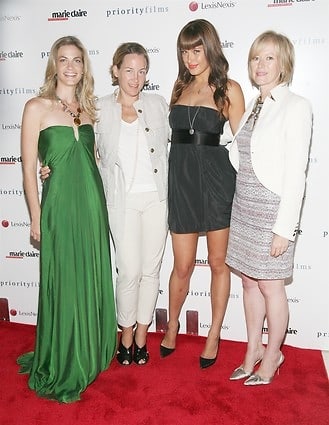 Go HERE for photos from the after party by Hayley Proudfoot

The Editor in Chief of Marie Claire Magazine, Joanna Coles, hosted an award ceremony, and a red carpet screening event for my favorite producers, Guy Jacobson and Adi Ezroni. They received the 2008 US State Department Anti Trafficking Heroes Award from the Ambassador Mark Lagon, the director of the Office to Monitor and Combat Trafficking in Persons in the State Department. After the ceremony, everyone continued on the the after party at Mansion, where they were able to raise more than ten thousand dollars for the campaign.

The movie Holly describes how human trafficking is a major problem worldwide facing our country.

Adi Ezroni is an actress/producer who has inspired others and has taken her time to make people aware of how terrible and serious a subject this is. In attendance- model Petra Nemcova who has changed her hair to a darker hue- most couldn't recognize her- spoke about her desire to help out in any way possible.

The Miss America girls attended, Kim Cook, Rachel Heller the actress, who said she was touched by the charm and poise Adi had when giving her speech before introducing the film, Marie Claire-the host who gave out fabulous gift bags including Aveda products, Elizabeth Arden nail polish, and of course the newest Marie Claire Magazine Erin Muller attended sided by Michael Lohan, and Julissa Bermude. What an informative evening!

[Holly Screening At The Quad] [Interview With Adi Ezroni]