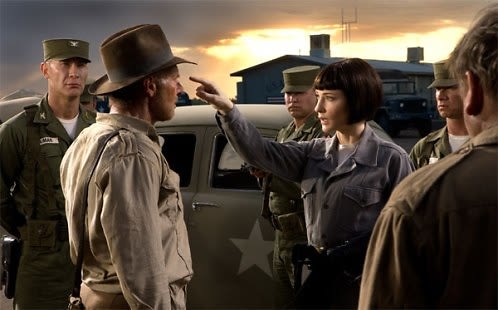 I can’t say that I’m the biggest Indiana Jones fan ever, but I can say that I had some relatives in town this weekend who wanted to see Indiana Jones and the Kingdom of the Crystal Skull. So, I saw it. It didn’t take long before the kitsch hit the screen, summoning vague childhood memories of the Temple of Doom and TV dinners. It was then that I remembered that Indiana Jones is something of a satire, which would explain Jones Jr.’s preternatural sword fighting ability. But does it also explain Cate Blanchett’s botched Russian accent and Ford’s Dubya-worthy pronunciation of “nuclear” (“nooke-u-ler”)?

Since I’m not a big Indiana Jones fan, it’s difficult to comment on how the plot and the characters measure up to the Joneses of yore. What is easy to say, however, is that the story and the characters fail to deliver; they don’t convince you that you’re watching anyone other than Harrison Ford, Cate Blanchett, and Shia LaBeouf run around a series of contrived movie sets while missing the comedy mark. What did you think?