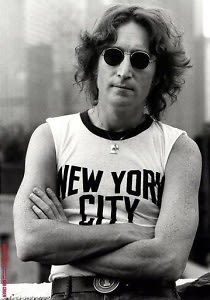 New York inspires reinvention. But sometimes a man falls for New York and leaves as big a mark on the city as the city left on him. John Lennon was one of those men. And Michael Epstein's LennonNYC, playing at the NYFF, is a documentary about the artist and city's sadly truncated love affair.

John Lennon loved New York for many reasons, including that no one in the city bothered him because he was John Lennon. One friend interviewed in the movie remembers Lennon's joy at buying a preposterous metallic jacket with fur trim without anyone in the store asking if he needed help. And he and Yoko Ono had a head scratching affinity for hailing cabs on 8th Avenue. Also unique to New York? Fans who didn't want an autograph, but just a handshake. "That's the coolest," said Lennon.

In addition to the unique, pleasant quirks of New York living, Epstein frames Lennon's expatriation to Manhattan as a classic immigrant's tale. Lennon sought freedom. Freedom to create, but also freedom from the singular pressures of celebrity that had made his and Ono's life in London a living hell. Only in New York could one of the most famous men in the world blend in with the crowd.

As for the New York natives who, even back in its supposed anarchic '70s glory, grumbled about their hometown, Lennon said:

"I've met a lot of New Yorkers who complain about the city. But none of them ever seem to leave." 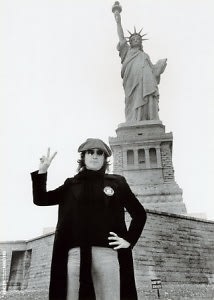 Casting a pall over Lennon's love affair with New York was the American government's very public attempts to deport him over his and Ono's involvement with the anti-war movement and various other cause célèbres of the time. Lennon was told he had two months to leave the country every two months for about four years. Exhausted by the stalled spectacle, Lennon only cared about NYC asylum, saying:

"Let them ban me from Ohio."

LennonNYC covers more ground than its title suggests. It's an encyclopedic look at Lennon's life between the dissolution of the Beatles and his murder in 1980, months after he'd turned 40 and rededicated himself to music. Lennon did spend most of this period in New York, but Epstein includes everything from Vietnam news footage to Sunset Boulevard B-roll. The grab bag technique suits the protean subject. Depending on when you caught Lennon, he was the world's most doting father, loving husband, political dissident, dedicated and brilliant musician, or wayward libertine. But LennonNYC would have benefited from less sprawl and a tighter focus on the romance between the man and his adopted city. 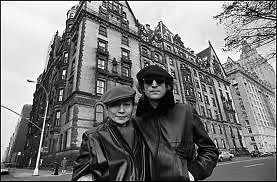 Speaking of sprawl, an initially pleasant, if creatively fallow, sojourn in LA ended in Lennon polishing off a bottle of vodka or whiskey every day to dull the pain of estrangement from Ono (which followed a drunken one-time dalliance on the night Nixon was reelected in 1972) and, you suspect, New York.

Finally, Lennon returns to the city and to Ono, the love of his life. Lennon and Ono's mutual adoration is overwhelming. And Epstein's affecting interview footage of a rarely unguarded Yoko might just inspire empathy among some of her many lifelong critics.  It's New York where the couple were happiest until Lennon was shot outside their apartment in the Dakota.

Ono remembers Lennon telling her, "I should have been born in New York." Lennon couldn't change that piece of history, but by living and dying in New York, he became part of the city's history and one of its own.