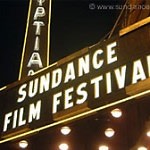 This past January you may have been bsuy with many not entirely horrible things. Maybe you were shoveling snow. Maybe you were making shrimp gumbo with turnips. Maybe you were plotting the hostile take over of all New York City debt collectors, Fight Club style. Whatever it was, it probably couldn't compare to the Sundance Film Festival because there's nothing like sneaking a warm flask of bourbon into a theater while standing ten feet away from Parker Posey during Q&A sessions with uber-serious documentary filmmakers. They use words like "solipsistic" and "resonant" when discussing their "craft" and throw free party schwag into the audience as payment for their rapt attention.

Make no mistake, it is fantastic. However, in recognition of the limited amount of private charter jets available to most of us (jet fuel is just so expensive these days), Sundance has now come to us. The Brooklyn Academy of Music (BAM, like in the old Batman comics) is doing a week long showing and party circuit for New Yorkers interested in checking out great flicks a year before they're released and then gloating about it to their co-workers. See, everybody wins! A final tip, members can reserve priority tickets in advance ($60 membership fee and $7 individual tickets) and, of course, the membership payment goes to support BAM- one of the city's most eclectic cultural organization whose name gives you the chance to use jazz hands in conversation. Priceless.