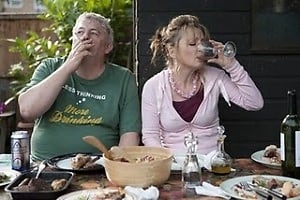 The 48th Annual New York Film Festival runs through October 10th. Mike Leigh's Another Year and Kelly Reichardt's Meek's Cutoff are two of the festival's selections. Find out what I thought of them...

The characters in Mike Leigh's Another Year are older and, some of them, wiser than the lost souls in the director’s other contemporary works like Naked and Happy-Go-Lucky. They've lost the fleeting excuse of youth for their romantic woes, general indirection and Herculean beer, wine and cigarette consumption. Good thing Leigh still lets them talk exuberantly, even if the conversations are rooted in a sadness that bubbles beneath the surface before it comes to a searing boil.

Mary (Lesley Manville) is the loser you can't help but root for in this Leigh ensemble. Recently divorced, not getting any younger, and fresh off an affair with a married man, she clings to her exceedingly kind friend Gerri (Ruth Sheen), Gerri's bemused husband Tom (Jim Broadbent) and, more poignantly, their nauseatingly stable marriage. Gerri and Tom are the kind of people who can't acknowledge the truth behind the saying that houseguests, like fish, stink after two days. Maybe because they have the patience of a therapist (Gerri) and an archeologist (Tom), a shared temperament that benefits the sprawling garden they tend to.

Gerri and Tom apply their green thumbs to the wayward Mary, and only smell something rotten when she clumsily lets slip her crush on their son Joe (Oliver Maltman).

Not to torture the nursery metaphor, but Leigh has written another organic screenplay that is at turns deliriously and painfully recognizable. Delirious because he writes the sort of smart, funny, unvarnished dialogue we wish we spoke every day with our friends and painful because we usually fall short. Leigh doesn't write in sound bites, which is only frustrating because you wish you could recite large chunks of it at will. Credit also goes to his actors, who through extensive improvisation build Leigh's premises and characters into a freewheeling but graceful whole.

Another Year is broken into the four seasons. As in life, people drift in and out of the story before you're ready for them to come and go. The revolving door of characters, elliptical narrative, and emotional tightrope act mesh surprisingly well with the schematic chronology until winter arrives. Dick Pope's relaxed, unobtrusive photography corresponds to seasonal hues throughout. The final transition to a bleached, slate grey winter from an autumnal amber glow is too severe, effectively making the viewer as morose as the sapped Mary. You yearn for the lushness of summer and a happier Mary, even if she was only kidding herself in the warmer months. 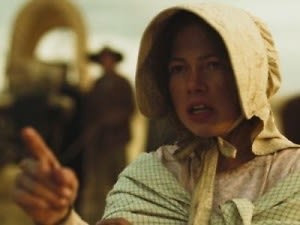 Meek's Cutoff by Kelly Reichardt is about as far as a movie can get from dialogue-driven without being a silent. A period Western without the period kitsch, it follows a group of taciturn Americans along the Oregon Trail in 1845 as they try to determine just how lost they are and if they’ll ever come across some much-needed water. (Maybe extreme thirst explains why the yapping is kept to a bare minimum?)

What words there are (from writer Jon Raymond) leave a mark, especially during some anachronistic battles of the sexes (As Emily Tetherow, Michelle Williams might as well turn around and head to Seneca Falls) and fraught discussions about how to handle an Indian (Rod Rondeaux) they find along the way. Will the Indian lead them to freshwater and riches or a grisly massacre? Expansionism in the name of resources and ambivalent feelings toward the maybe threatening, maybe altruistic natives. We Are What We Are isn't the only allegorical movie at this year's NYFF.

Reichardt's film is as ambiguous as that Mexican cannibal yarn was gleefully ham-handed. Christopher Blauvelt's gorgeous, spare cinematography speaks for itself, capturing landscapes, faces and silhouettes that will be suitable for framing once audiences can pause the shots on DVD. The fine actors don't try to steal attention from the background they inhabit but aren't overwhelmed by it. Jeff Grace's reticent score only swells to lightly suggest, rather than telegraph, danger.

Meek's Cutoff is the rare weighty film that manages to feel like an elegant wisp of a movie.