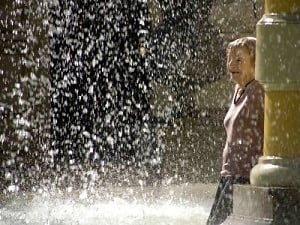 The 48th Annual New York Film Festival runs through October 10th. Sebastián Silva's Old Cats and Cristi Puiu's Aurora are two of the festival's selections. Find out what I thought of them...

In Sebastián Silva's The Maid , a family and its housekeeper depended on and took care of each other. The young Chilean director's follow Up, Old Cats, is about people who can't take care of themselves.

Isadora (Bélgica Castro) is losing her mind to old age. Her husband Enrique (Alejandro Sieveking) is relatively with it, but still wakes up to a smorgasbord of pills. Their wayward daughter Rosario (Claudia Celedón) gives them a few hours notice of a visit. Ideally, they'd have a week to steel themselves for her arrival.

Rosario barges in like a Latina Kramer. She freaks out about her mom and stepfather's old, overfed cats (she claims allergies) and proceeds to do key bumps in their bathroom (so much for worrying about the sniffles) between attempts at swindling them out of their apartment and money. The goal is to get a harebrained business plan involving soap bars from the Andes off the ground. Sorry, make that "healing tablets," some of which "address specific ailments!"

Thanks in part to a busted elevator in the building, co-directors and writers Silva and Pedro Peirano confine almost all of the action to Isadora's apartment. But Old Cats doesn't feel claustrophobic or theatrical. Silva's handheld camera brings the cramped quarters to cinematic life as it examines the old couple's domestic routines before Rosario turns them on their heads. As in The Maid, Silva has a knack with faces, which he uses to comedic and piercingly dramatic effect.

Here we see that gift focused on the 92-year old Castro as her eyes fluctuate between alert, if plaintive, and glazed over and bewildered. Celedón deploys a lip snarl to alternately humorous and frightening effect. Rosario's girlfriend, Hugo (Catalina Saavedra, The Maid's titular heroine), who Isadora insists on calling by her "proper" name, Beatrice, and Enrique comprise something of a Greek chorus to the combustible mother-daughter dynamic. They're the only characters whose heads approach levelness, and are sympathetic in Saavedra and Sieveking's hands.

The Maid was a character study in the context of fragile Chilean socioeconomic mores. Old Cats is an equally personal film about more universal subjects--looming mortality and family members that make you wish you were already six feet under--that should build on the considerable international success and audiences of Silva's previous triumph. 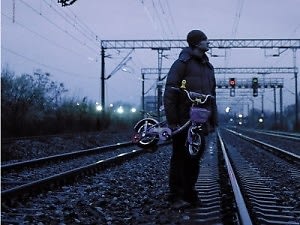 I don't feel right reviewing a movie I walked out of halfway through, so I won't. Suffice it to say, I walked out of Aurora halfway through. I've fled movie theaters before the credits rolled precisely once in the last decade (during The Science of Sleep). Unlike at that whimsical French film, I was not the only audience member to fumble in  darkness toward the exit.

Aurora is directed by the acclaimed Romanian Cristi Puiu. It's about Viorel (played by Puiu) whose excruciatingly dull quotidian life obscures his moonlighting as some sort of political assassin. (He ominously fondles a gun before gazing on end at a leak in his bathroom ceiling.) I will say the movie looks nice, with Viorel Sergovici doing some beautiful cinematographic work with Malick-style magic hour falling across post-Soviet desolation.

I saw Aurora at the end of a very long, frazzled weekend. I'll give it another try. But on Sunday at the Festival, I was reminded of Gus Van Sant's Elephant, another tortuously slow-burning movie about violence that made me guiltily wish the villains would start knocking off innocent high school kids immediately.

I grew to respect Elephant. It stuck with me. Then again, the movie clocked in at 81 minutes. That's around the time I fled Aurora. Again, I left halfway.