Celebrities. We love to build them up and then tear them down. But sometimes, the stars have a way of dismantling their own reputations that puts the public's to shame. Witness two bizarre incidents featuring rising star directors (and Oscar hopefuls) Lee Daniels (who maybe kind of blew a chance to bust a child abuser) and Jason Reitman (who just acted like an asshole).

Lee Daniels: New York mag's Vulture blog posted a doozy of a quote from the Precious director yesterday. In the best example of a buried lede that we've seen in a while, the Vulture article begins with a discussion of Precious's Oscar chances. Daniels says thinking about the big show is "very scary. And I'm nervous." 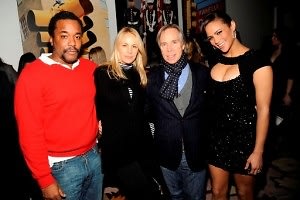 He goes on to explain that in a way, he's already been rewarded enough by the people his tough movie (about abuse and poverty among a smorgasboard of other miseries) has healed people. The evidence: ""Some guy came up to me at a screening that I was at recently and he told me that he, um, was sexually abusing his 14-year-old daughter." Um, indeed. Daniels seems to have been too impressed with his power to draw out such a confession to actually do anything about it, only saying that ""That's what he told me. And he was crying. To me, that is the award...My award is healing."

That's nice, but we'd probably go for a different method of rehabilitation by smiling and backing slowly away before calling the cops to inflict some healing of their own. Vulture commenters agree, having left a trail of WTF comments in the article's wake. But will Precious cheerleaders Oprah Winfrey and Tyler Perry voice similar concerns?

Jason Reitman:It's always fun to see a reporter pepper usually fawning celeb profiles with subtle digs at her subject. Even better? Seeing the writer go off on a wild tangent of thinly veiled disdain for someone who was never meant to appear in the piece at all.

That's what happens in Laura Holson's piece on Tom Ford and his transition from designer to director (with the raved-about A Single Man). Things go swimmingly until Jason Reitman stumbles over to the table where the interview is being conducted. Reitman is the director of Up In The Air, which like his last effort, Juno, is an overrated souffle of a movie with a veneer of topical angst. (It's about layoffs).

Anyway, Reitman tells Ford he loved the film. Ford asks if he liked a specific scene. Reitman asks Ford if Ford is hitting on him. With Ford rightfully baffled, Reitman goes on to lecture his lunch guest, dismissing her interpretation of the scene, saying movies "aren't meant to be told that way." Ford, who we're really starting to like, cuts him off: "You really should go now." Sadly, he doesn't.

Conclusion: to steal an interview from Tom Ford, you have to be a pretty big dick, especially considering Ford has no problem showing journalists his own.