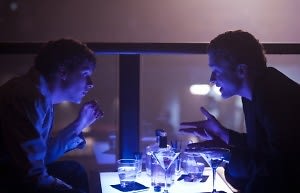 The movie about Mark Zuckerberg (Jessie Eisenberg), the man who made 500 million people feel like "friends," begins with him losing a girlfriend.

Zuckerberg's inspiration for starting the hyper-modern, impersonal Facebook lies in ancient human biology. Fresh off a broken heart after Erica (Rooney Mara, eliciting far more sympathy than her nine or ten minutes of screentime should allow) dumps him in the movie's rat-a-tat opening scene, the seeds of the site are sown in a vengeful blog post he writes questioning her claim to being a C cup. One puerile thought leads to another, FaceMash (basically a ripoff of Hot or Not that pitted Harvard students against one another), which exposes the student body's desire for a centralized online register, which leads to Facebook.

As Zuckerberg's success grows, he's no longer out for revenge, but for validation and winning Erica back. He also hopes to impress the Aryan gods that roam Harvard's athletic fields across the Charles River and the handsome, carefree golden children that constitute the school's final clubs. Jealousy and social aspirations (of the tangible, if no less shallow kind) quickly supplant relationship woes as the engines behind Zuckerberg's drive for suddenly plausible world domination.

They also land him in hot water. Original business partner and "only friend" Eduardo Saverin (Andrew Garfield) takes Zuckerberg to court after he claims to have been wrongly dropped as Facebook CFO. (The Social Network suggests that Zuckerberg's jealousy over Saverin being selected for a final club initiated the bad blood).  Twins Cameron and Tyler Winklevoss (Armie Hammer, doing double duty), who propose a Harvard social network to Zuckerberg before he debuted Facebook on his own, also file suit. (Full disclosure: Cameron Winklevoss is the publisher of Guest of a Guest.)

The Social Network, which opens the New York Film Festival tonight, is equal parts legal thriller, creation myth, tech saga, undergrad dramedy and social commentary. Somehow, it doesn't feel overambitious.  Though screenwriter Aaron Sorkin's dialogue is typically cutting, the epithets as rapid fire as ever, his work here is less showy than it's sometimes been in the past. Much has been made of the pairing of the verbal Sorkin and visual Fincher. Fincher maintains his trademark crispness, both in pace and frame, but the film's weighty themes, procedural elements and chatty characters do keep the director away from his recent lyricism and flights of fancy (think The Curious Case of Benjamin Button or that heavenly floating shot of the Golden Gate Bridge in Zodiac). Compromises aside, any pairing that can make law firm conference rooms this compelling is a good one.

The actors have tough jobs. With the exception of Erica, it's tough to root for a single character. As played by Eisenberg, Zuckerberg is an ambivalent combination of ungainly ambition, childish insolence and Sphinx-like calm. Fincher and Sorkin's kinetic pacing fits the explosive growth of Facebook and invests the audience in it. But you never sense Zuckerberg shares in the excitement. Garfield's naive, underwritten Saverin would be sympathetic if his motives and backstory had been less murky and he'd shown more grit. For two very bright, hardworking kids who unleashed Facebook on the world, Zuckerberg and Saverin are awfully diffident.

If these characters had been more dynamic, The Social Network would have been less reliant on the drama surrounding Facebook's origins and its getting off the ground. As it is, the movie's energy flags as it moves from Harvard to Palo Alto and the company's fortunes rise.

Sean Parker (Justin Timberlake) is the closest The Social Network comes to an outright villain. Parker (a Facebook interloper who comes from Napster infamy to corrupt Zuckerberg) injects sex, drugs and lots of money into the young company's world of coding. Obviously, he's the most fun person onscreen. Timberlake is convincingly sleazy and charismatic. But you never forget you're watching Justin Timberlake.

Facebook and Zuckerberg did not cooperate in the making of The Social Network, nor in Ben Mezrich's "The Accidental Billionaires", the book on which it's based. But the movie is less damning than you'd think an unauthorized take would be. Maybe its evenhandedness stems from the cast and crew's indifference toward Facebook itself. Fincher, Sorkin, Eisenberg, Garfield and Timberlake, left, appeared after the screening for a press Q&A. Not one of them has an active Facebook account.

That could be their most damning indictment of all.