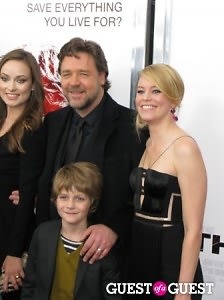 At last night's premiere of "The Next Three Days" at The Ziegfeld Theater, we did some detective work to find out what Russell Crowe's like on set. As we learned from James Franco last week, lots can be gleaned from these tidbit insights:-

Ty Simpkins, the actor who plays Crowe's son in the film (and who also played the son of Kate and Leo in "Revolutionary Road") told us about Crowe's jokes and hi-jinks.

"He pulls a lot of jokes," Simpkins said of Crowe. "When I just saw him the other day, he saw the movie, and he was like, 'You sucked!' And he was just kidding, though," 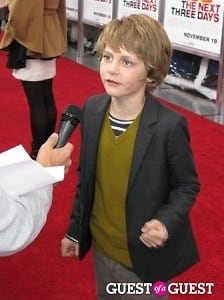 Beyond this blunt teasing,the Aussie actor had some tricks up his sleeve on set, with particular attention to disruption of the filming. "[Crowe] hid the luggage in the airport," Simpkins said of the Oscar-winner's pranks while filming in Pittsburgh.  Crowe also enlisted Simpkins and Elizabeth Banks to participate in the action. "Props couldn't find it!" Simpkins related. "It was freaking out."

Michael Buie, who plays Crowe's fraternal unit in the film, said "there's a lot of pressure being Russell's brother," though the two have a certain camaraderie that eased the tasked.

The two bonded during the filming of "Mystery, Alaska," (Russell Crowe's best film besides this one, clearly," Buie quipped), which  had the two living in ice cold Alberta Canada as part of a hockey team for five months.

Crowe and Buie have similarly chiseled features, but of the resemblance, Buie said, "I've only heard that after I got cast in this, and I have heard it many times since." He did have one qualification. 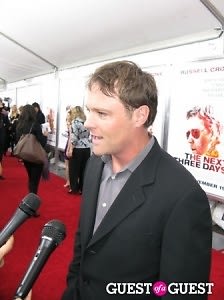 "It says in the script," he joked, "and I just want to point this out.  In the script that Paul Haggis wrote it said, 'his better-looking younger brother.'"

But what does Crowe have physically that Buie doesn't?

Paul Haggis, "The Next Three Days" director, writer, and producer, said that Crowe's antics do not take away from his professionalism.

"He could be messing around two minutes before, 30 seconds before," Haggis said. "You turn on the camera, bang...he's there.

Haggis said that focus is all the more necessary when Crowe plays the nuanced characters, not the powerhouses:

"What Russell Crowe can do well is, we all think of him as these characters like Robin Hood, Gladiator, and all these characters that he's played in these fabulous films, Ridley Scott films and others, but he did A Beautiful Mind, these delicate performances. I knew he could play an everyman."

And indeed, his off camera antics indicate an even closer approximation of that "everyman" identity. 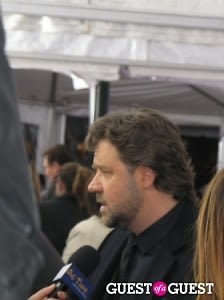