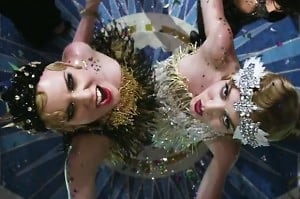 The internet is obsessed with Baz Luhrmann’s The Great Gatsby, and the film doesn’t even come out until December. But the trailer, which was released this Tuesday, uncorked a serious bottle of cinematic champagne: fireworks, flappers, and Jazz Age decadence set to the soundtrack of Kanye West and Jack White. A tuxedo-ed Leonardo DiCaprio, who plays Jay Gatsby, was an added bonus.

As a voice in the trailer describes 1920s New York: "the buildings were higher, the parties were bigger, the morals were looser and the liquor was cheaper."

Which is testament to the greatness of the original material. How else could a novel written in the early 20th century still have such broad cultural appeal? Everyone loves a great escape, and a story about excess might just be what the doctor ordered for the recession-weary masses.

After all, although Gatsby author F. Scott Fitzgerald lived a lavish lifestyle, he constantly spent beyond his means. On one occasion, he recalls coming home from the bank to confront his wife, the iconic Zelda Fitzgerald, about their finances.

Cheers to that, girl. The Great Gatsby, starring Leonardo DiCaprio, Carey Mulligan, Isla Fisher, and Tobey Maguire, will be released December 25 – in 3D! So y’all better get started on that bootlegging business so you can afford the tickets.