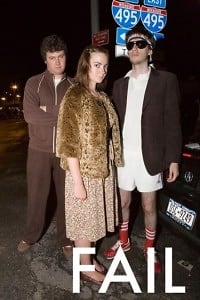 Tumblr is becoming quite popular for creating meaningless sites that seem to spark popular trends.  The latest, Tenenbaum Fail,  spends its time dissecting the failed attempts of groups trying to emulate the Royal Tenenbaums. And look who made it on! Our leader dorks-Gawker's Richard Blakeley,  CNET's Caroline McCarthy, and Tumblr's David Karp! (pictured at right). [Tenenbaum Fail]

Twitter is all over the news, and it's not just for that very publicized Anniston/Mayer breakup:"He has time for all this Twittering, but he can't send me a text, an email, make a call?"- that has propelled them to a new stage of accomplished relevancy.  You see, it seems they are open to GASP! advertising, albeit a very covert form. [Valleywag] Also, they seem to be tweEking their title tags for better google juice. [Tech Crunch]

Xbox 360 Soap: "Rated C For Clean" For only $12 on etsy, you can be the proud owner of the XBox 360 soap. "You could totally hand this bar to player two without them knowing the difference...until their hands became baby-soft and began to smell like freshly cut flowers and spring rain." [Gizmodo]

Netfix pays only $.06 to stream a movie to you. Explains why they are making the push to digial streaming. Exciting news for you movie fans [Streaming Media]

AdMob's iPhone ad business is exploding, growing more than 35 times in the last year. Much of that credit goest to Apple of course [Buisness Insider]

Ex Gawker Editor Choire Sicha and his new book plan are the talk of the town today. But will you be reading (or one of the characters?) [Choire Coverage]