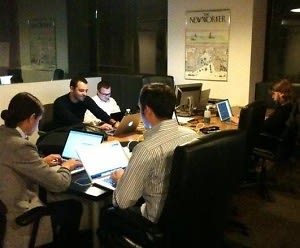 When you hear the phrase "tripping the light fantastic," does staring into the cancerous glow of a laptop hammering out spreadsheets spring to mind? It does for the proud wonks of New York Nightowls. And they won't be drinking or having sex tonight!

NY Nightowls is a "weekly meetup of hard-working people with just too much to do for the standard 9 to 5 lifestyle." We all know that one guy who, rather than keep his hellish hours and tedious hard work to himself, needs to broadcast them to his lazy going-nowhere friends whenever given half a chance. NY Nightowls gives all of those guys and gals a chance to revel in their shared Type A-ness. 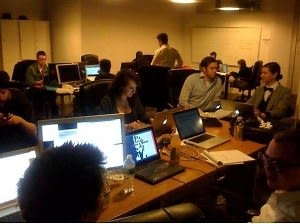 Well, not all of them:

Organizer Allan Grinshtein certainly knows how to get people excited for a party. In one the only post on the group's message board, he whets the appetites of working grinds and Asian engineering majors the world over with the following universal geek mating call:

"I'm Allan, you'll see me on Tuesday night. I'll be the one hunched over my laptop working on some e-commerce stuff. See you there!"

I just don't see the point of this organization. I dig the idea of "people...working on their big idea" late at night, leading to a "city skyline...punctuated with lit windows." But wouldn't a room of one's own foster creativity better than a jam-packed windowless bunker?

And if some desperately needed socialization is what these folks really crave, couldn't they force themselves to shut their MacBooks for 10 minutes and, I dunno, share a meal that hasn't been charged to their company's Seamless Web account?

"Early to bed and early to rise, makes a man healthy, wealthy and wise," said the great Ben Franklin. Maybe some wise soul with enough scratch could send a stripper over to the meeting location tonight. Or at least spike the group's countless Red Bulls with vodka.