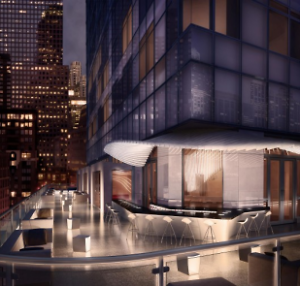 As the Observer reports, a new ice rink  will open this Saturday at the W Downtown Hotel. The chic patinoire will be located on the fifth-floor terrace bar and offer its fair share of controversy.

Given that the Gwathmey Siegel-designed condo-hotel has a bird's eye view over Ground Zero, the perspective from the rink's vantage point puts the dark history of the area at odds with the wintry recreation (complete with libations).

Much controversy has bubbled up with regard to the so-called Ground Zero mosque and whether it is appropriate to have such a place of worship and a recreational center near sacred, scarred American territory.

The same questions could arise with regard to the new rink, which in overlooking the rubble and construction site also overlooks solemn mummery the place warrants.