Richie Akiva and Scott Sartiano have gone the way of the Tepperberg (Marquee has been in business for a decade), with their first hit on Lafayette Street, Butter, which has been holding on to the #1 place to go on Monday nights for 7 years (this November). Last night, Richie and Scott were spotted partying it up with guests John Mayer, Lindsay Lohan, Samantha Ronson, Ben Lyons, and others.... 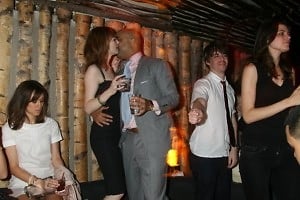 So, how DOES a nightclub stay relevant after all those years? Have owners that are experienced in all things NYC Nightlife, with thick Rolodexes from their days as promoters, and enough stamina to withstand thousands of nights out until 5am.

Get Steve Lewis involved in some aspect of the design. He will tell everyone he knows about where the inspiration came from for years to come.

Talk about changing the face of nightlife in NYC, and then have enough time and energy to go and do it.

You need to have some A-list contacts that trust you because you have never disclosed the NUMEROUS acts of incredulous behaviors that you've witness them partake in at your establishments. You will go so far as to pay for photos of said celebrities to be burned by the bloggers that got emailed phone photos of them.

Add in a couple mentions on Gossip Girl and NYC Prep, along with a day of the week that has little competition (Monday night) and you are on your way for a successful run. Pretty Young Things will clamor to throw their birthday parties there, and you will have more hungover Tuesdays than you care to remember.

@perezhilton@lindsaylohan Girl, what happens in NYC ends up in my ears! #SaveLindsay #GoToRehabLohan about 4 hours ago from web in reply to lindsaylohan

@johncmayer: @ThisIsRobThomas don't puss out! You're a rock star. Be one! Tell the truth. :) about 13 hours ago from Twittelator in reply to ThisIsRobThomas

And, despite all of the rumors and tips we have received of a blow out fight between Lohan and Ronson, the two apparently were having a great time together last night according to our eye witness.