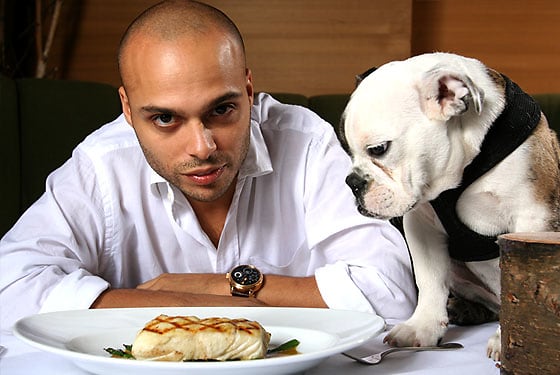 ...So claims Richie Akiva, owner of Butter with partner Scott Sartiano, to NY Mag.  1OAK is set to open on October 19th at 453 West 17th street and Richie isn't talking...at least about the new club which he "really wants to be a surprise".  One thing he is talking about is his diet, though even that comes off sounding too cool for us.  Here are some of our takes from the interview:

-Richie starves himself for the Jewish holidays, and has since he was a baby.  This includes not even allowing himself water or a face wash for 24 hours.

-His favorite cereals are Apple Jacks and Frosted Mini Wheats.

-He eats at either Butter, Bar Pitti, Da Silvano, or Cipriani for lunch everyday.

-Sundays are his "wifey days"..."Sunday I don’t do anything except hang out with my girlfriend at the time, whoever that may be. I call that day 'wifey day.'" Um...cute?

1.) Wednesday, September 19th: "I didn’t eat dinner. I had a big party for Puffy’s fragrance launch at a townhouse — basically a mansion — on 67th Street and Madison." (One)

2.) Tuesday, September 18th: "I had dinner at the Waverly Inn with my partner Scott Sartiano.... I’m always with interesting people. The other day I was with Scott and his girlfriend, Jamie Lynn-Sigler. Then I was with Puff one night at dinner at the Gramercy." (Two, Three, Four-for mentioning the Wavery Inn and the Gramercy in the same day)

3.) Monday, September 17th: "I had dinner at Butter with Diana Ross’s son Evan Ross, and a bunch of my friends and a couple of big model girls...Monday nights are rocking stronger than ever. We had Terrence Howard, Kimora Lee, Russell Simmons, and a whole bunch of race-car drivers like Jeff Gordon and Edie Irvine and Jimmy Johnson. Cuba Gooding Jr. was there. They come up to my table and say hi." (8 count them, 8 name drops, plus one for the models, brings total to 13).

4.) Saturday, September 15: "...then I went to Nobu...That's like a family place for me.  One of my best friends is Robert De Niro’s son, so I’ve been going there since the day it opened. They take care of me very well there.

Total Name Drops: 14 (This has to be a record for "The New York Diet" piece the magazine runs).

We're pretty sure it's going to take a lot more than one new club opening to "change new york's nightlife", but we are hoping that Richie surprises us all and proves our doubts wrong.